As I've already mentioned, there's another run of my two-day workshop "Celestial Navigation 19th Century Methods" at Mystic Seaport next weekend. There's still plenty of time to sign up. This is a class in latitude by Noon Sun and longitude by "time sights". I was browsing last night through a copy of John Letcher's very fine old book "Self-Contained Celestial Navigation with H.O. 208" (which I recommend, both for its content and especially for its clear and interesting prose), and I came across a section where he recommends the time sight calculation by calculator. I couldn't agree more, and this is the basis of my "Modern Celestial Navigation" methodology. But if you don't like calculators, of if you prefer more history in your methodology, then I recommend my "19th Century Methods" class.

Letcher, like many navigators, learned his history from the cartoon stories told in the introductions to various navigation books, and he erroneously describes the time sight as something that was used prior to Sumner's discovery of the line of position (c.1840). While that order is technically correct, the implication is all wrong. Sumner's method, first of all, was a flop when first introduced and did not catch on until quite late in the 19th century. Second, the time sight was also a component of the Sumner method --not a separate thing. And third, the common time sight for longitude was standard, proper navigation until the middle of the 20th century. Modern navigators have been served a re-written history that exults late 20th century celestial navigation as the inevitable triumph of modernism. It's a fiction.

The methods of the Old Navigation --noon Sun and time sights-- are every bit as useful today as they were 75 years ago and 175 years ago. In the class I'm teaching next weekend, we'll look over the shoulders of the navigators aboard the whaleship Charles W. Morgan in 1897. This is possible thanks to some rare good fortune -- the survival of scrap paper. The navigation notebook that survived from that voyage and is available online is literally that (thanks Sean, for including the link in a message earlier today). It's scrap paper that would normally have been thrown away or recycled in some fashion. Many other examples of scrap paper calculations do survive, but it's rare that they can be tied with certainty to a specific vessel and voyage. It's just amazing luck that computations like these have survived for the last remaining historic whaleship.

Time sights in the 19th century and through the middle of the 20th century were worked by common logarithms. There was a well-established recipe for this that was almost universally popular. I've seen examples of it in American navigation, British, and French, too. Of course there were always exceptions, and Martelli's "mystery tables" which we have discussed quite a few times, also had a small following. But by and large these sights were worked with logarithms, and that's how we'll do them in my class next weekend. The methods and tools are one-hundred percent applicable today. You can sail the oceans with the techniques and methods of the "Old Navigation". You'll learn to love logarithms ...plus that's fun to say! :) 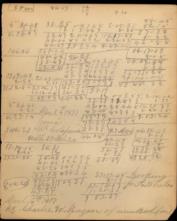 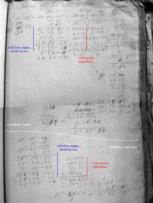 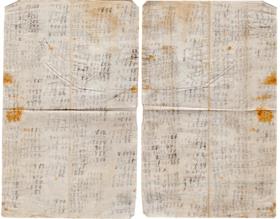