Old surveying books say quite a bit about celestial. It even gets a full
chapter in a 1989 textbook I own. By that time the main purpose of
celestial was to find true north.

The book lists some useful ephemerides, including the Nautical Almanac
(but not the Astronomical), and an almanac sold by the Leitz company.

An interesting accessory is the Roelof solar prism, which fits over the
instrument's objective lens. It dims the Sun and splits it into four
images in a square pattern. The separation is such that there's a small
diamond shaped area in the center where the images don't touch. That's
where you put the crosshairs. It's hard to simultaneously manipulate
both slow motions and stay precisely on target, so a common trick is to
set one crosshair ahead of the body, track with the other, and mark the
time when both crosshairs are "on".

Over the years I have attempted to collect and catalog all the older land surveying texts. That sounds more grand than it really is, it's a short list. One of my favorite texts is The Elements of Astronomy for Surveyors. My copy is by J. B. Mackie (1982), the first publishing date was 1918. Most of the older text do not mention Astronomy, for example Geodaesia by John Love (1767) only references a compass. I attached a photo of a North reference monument, this monument is in Magnolia Cemetery in Charleston SC. The second monument has not been found. It has been theorized that his monument was set so Compasses could be calibrated. 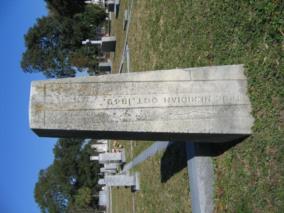 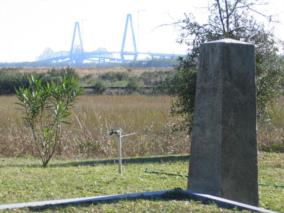