Reply
Re: Latitude by two stars observed simultaneously
From: Gary LaPook
Date: 2017 Dec 21, 20:17 +0000
You can always figure out your latitude from two stars without knowledge of time, Any two altitudes taken on two stars provide a fix in latitude and that fix rotates around the world as the world turns and knowing the time just establishes the fix in longitude. You can also plot the fix in terms of latitude and GHA Aries and that fix will remain constant (until the stars appear to move due to their proper motions or due to  procession of the Equinoxes.) This is what Weems used to make his Star Altitude Curves.
gl

Can you figure out your latitude? Latitude is easy, right? In the photo below, we're looking out to a sea horizon in the pre-dawn hours in northern hemisphere winter. The star clouds of the Milky Way look familiar... There are no traditional navigational stars visible, but with a good star chart (e.g. Stellarium), you can identify a few third magnitude stars. Measure the altitudes of any pair of them in the photo from the sea horizon, maybe using star-to-star angular separations to set an angular scale. Then look up the declinations and the difference in SHA between them (click on the stars in Stellarium), and you can work out your latitude. There are historical methods for this that ignored time entirely and it's possible to re-derive a version of those with some clever spherical trigonometry, but if that seems alien to you, then pick some arbitrary date, GMT and longitude and work it as a standard two-body sight using your favorite sight reduction technique. Here's the challenge: can you find the photographer's latitude within five nautical miles?
There are three versions of the photo attached here. The first is unmarked. The second has an extended sea horizon drawn in as a white line, which makes it possible to measure altitudes for stars toward the right in the image. The third also includes three labeled stars. That last one makes this all too easy, but if you're not interested in figuring out what part of the sky you're looking at and only want to work the computation, you can jump to that image and ignore the other two. For me, and maybe you, identifying the stars is half the fun, so I have included the tag "spoiler" in the third filename.
Frank Reed
Clockwork Mapping / ReedNavigation.com
Conanicut Island USA 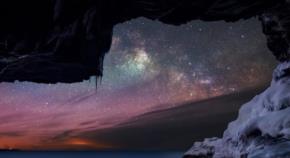 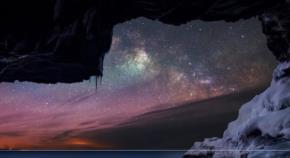 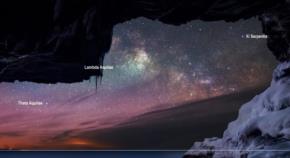