In my own analysis, I ended up with a best estimate latitude of 44°10' N. The actual location is near Schooner Head Trailhead, which is within a US National Park. The actual latitude of this location is 44°20.4' N. I found I could get the most consistent results by selecting two stars with the same altitude. I started with one of the brighter ones, then ran a straight line across the image and looked for a recognizable pattern of faint stars intersected by the line. Then I adjusted the latitude to match.

I take back my earier suggestion about getting a scale from star-to-star angles. That doesn't work with the projection onto a plane that we see in photographs of the sky. Instead we need "plate constants". That's not necessarily hard to do, but it's more than I would want to apply to a case like this.

I'm including two images showing the same view in daylight and an exterior view from above. Nice, huh? Apparently the place has been ravaged by beachcombing tourists since the late 19th century, even after its protection within the park system, so I won't be more specific. 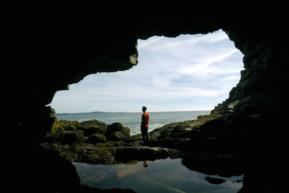