I managed to download Stellarium, but it wouldn’t run on my net-book, so I had to find a different method.  My working was as follows.  The calculations are in the attached spreadsheet.

Showing a solution is possible (credit to GL)
In Figure 1 below, if small circles radius co-alt are drawn around two stars on the celestial sphere, they will cross at two fixed positions on the same sphere.
If a globe of the Earth turns inside the celestial sphere, the fixed points will trace fixed small circles of latitude around the Earth.  At least one of these will correspond with the suggested climate.

Getting the altitudes (as suggested by FR.  Thanks also to JS for sending me the RAs and Decs privately.).
In Figure 1 below, I used the cosine rule on the side-angle-side spherical triangle to find the angle between Theta Agl and Xi Ser was 40.626 degrees.  I equated this to the measurement on my laptop screen to get altitude Xi Ser as 22.3501 degrees and altitude Theta Agl as 9.1382 degrees.  We can worry about significant figures later.Finding the latitude
In Figure 2 below, I realised that if I assumed a series of co-latitudes, I had three known sides of a spherical triangle, and I risked using the cosine rule again to obtain LHA star for each latitude between 40N and 50N for the calculated co –altitude.  Then, I subtracted SHA star from LHA star to get a series of values for latitude v LHA Aries for the measured altitude of each star.  I was disappointed to find the sets of results didn’t overlap.  Eventually, I realised arc cos A could be westwards or eastwards.  I adjusted the spreadsheet, and the results overlapped.  I plotted these on the same graph (below) for each star.  Where the lines crossed was the desired latitude.  Assuming the maths is correct (????), most of the error in the 42degrees 30’ obtained must be due to measuring the distances with a ruler straight off my laptop screen, which we know is not ideal.  Next time I’m in the Astrovan at night, I’ll take sandwich readings on two navigational stars with the Smith’s Mk2C and try the graphical method again to see if it works with reliable altitudes.  DaveP 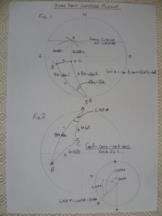 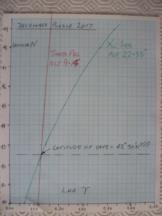