Ten days ago you posted an example of a latitude by double altitude, as the problem is sometimes called, starting from a sample scenario I posted a couple of years ago. You showed us that you worked it using one of the methods in a 19th century Bowditch. In case you haven't discovered it yet, some years ago I put together an archive of links to old navigation manuals and related resources. That's located here: http://fer3.com/arc/navbooks2.html. It's important to emphasize here that the study of historical navigation manuals is not the same as the study of historical navigation. For the latter you have to find primary source documents. What did they actually do?

Of your experiment, you wrote:
"I used step by step guidelines published in Bowditch(year 1864) and table XXVII (in the same book). I used pdf format e-book. I could not imagine that whole process will be so time consuming. For example, I can clear lunars using 19. century Thomson tables in some 7…9 minutes, but this unexpectedly took 5…6 times more time. It was surprise for me, because all the calculations fits in one A4 format page. Visually it seems that the procedure is not so complicated. Of course I understand that for those 19 century navigators who did these calculations regulary, the task was ordinary. However, I doubt how frequently the method of latitude by two altitudes was used at that time. "

That's a great comparison! I teach a variant of Thomson's Tables in my lunars workshop. We usually clear one lunar by Thomson within the first hour (in a two-day 9 or 10 hour workshop) since that blows away the old myth which claimed that lunars required four hours of math. I'm not surprised this lat by double altitudes problem took longer, and you're right to have doubts about how frequently methods like this were used. Part of the reason it's in the navigation manuals is because this method had become a favorite of mathematicians and would-be mathematicians in the late 18th century. Apart from clearing a lunar, lat by double altitudes was the nut to chew on. Inventing one's own method for this problem was a "rite of passage" for navigator-mathematicians. In primary source documents, there are some references to actual cases of latitude by two altitudes, but the word "rare" fits here.

To see the status of this technique in the late 18th century and for a breakdown of some of the mathematical techniques, see the seminal paper (MyR-lunars-etc-1796.pdf) by Don Jose de Mendoza y Rios. His paper (linked above) Recherches sur les Principaux Problemes de l'Astronomie Nautique (1796) counts the "principal problems" as exactly two: latitude by double altitudes and clearing lunars. So this problem had both prestige and practical value. And yet by the early 19th century, latitude by double altitudes was falling by the wayside while tools for clearing lunars were being significantly improved, as we see for example in Thomson's tables. The presence of that method in a copy of Bowditch's Navigator published in 1864 unfortunately tells us little about practice. It was added because Nathaniel Bowditch liked that method, and he had no reason to delete it during his lifetime (he died in 1838). After he died, the book was practically a memorial to him, managed and lightly edited by his son. Very little was changed until the book was adopted by the US Navy. After that it was a radically different book (took a while! the revision wasn't released until after 1881).

Thank you for including the photo of your work (copied again below). It's great to see one of these old, relatively obscure methods worked out in full in a practical case: 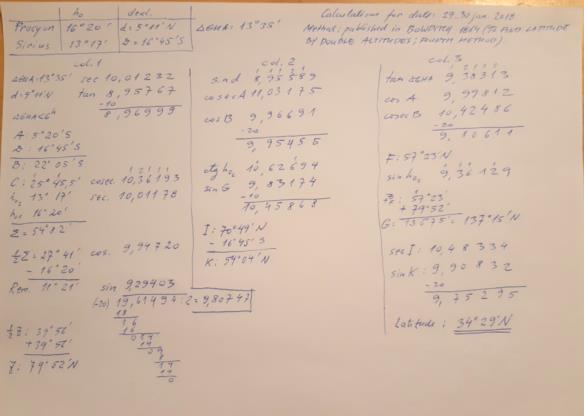 In a modern context, how would navigators solve this most efficiently. If you don't know the exact UT, you can guess or pick a number arbitrarily. The fix you get from the calculation will have the correct latitude, and the longitude is thrown away. But I wonder how many navigators would understand that.

Again, thanks for posting this analysis. Really great work.