I wouldn't want anyone wasting any more time on my little pop culture teaser. The documentary is "The Go-Go's" about that punk band tuned pop band from forty years ago. It's a fine little documentary, but with a mostly cliche story to tell: "they were kids! then they rocked! uh-oh, in-fighting... uh-oh, heroine... jealousy over money! the band breaks up... but we're old now, so the band gets back together to milk it for some nostalgia cash... ahhh... all better! the end." Heh. I enjoyed it, but this does also connect to a popular internet meme: "friends don't tell friends that 1980 was forty years ago!" Yeah, those young rockers who were in their early twenties are now in their early sixties. Funny how that happens.

Here's the video for the lyrics I used as a hint. There are lots of reviews of the new documentary. Here's one from, of all places, National Review.

Back to the navigation puzzle, as I mentioned you can get the latitude (and longitude) very quickly by searching Google for "colorful hotel". It's one of the first hits. So that takes us to the Saguaro in Palm Springs. But what can astronomy tell us? Given Altair and Vega and given a true horizon from the extended floorlines of the building, we have a pair of altitudes that we can measure to perhaps a quarter of a degree. That locks the latitude to about that accuracy, and the sidereal time (equivalently LHA of Aries), to similar accuracy. But can celestial navigation clues in the photo tell us the longitude? I would say no. There's no measure of UT, and as always, without that we're done. We can, however, get the date to within a day or two, I think. There's that planet on the extreme left edge of the image. Assuming the image has been created within the past ten years, there really aren't many options. You can go into Stellarium, put Altair and Vega at the right altitudes, and then advance the calendar one sidereal day at a time (shortcut alt+= does this) and watch the planets come and go. I found only one reasonable hit, and it was Mars on "Thanksgiving Eve" 2016. That seems reasonable. The starry time-lapse above the Saguaro was probably pulled off some photographer's shelf with no connection to the production of the doc. 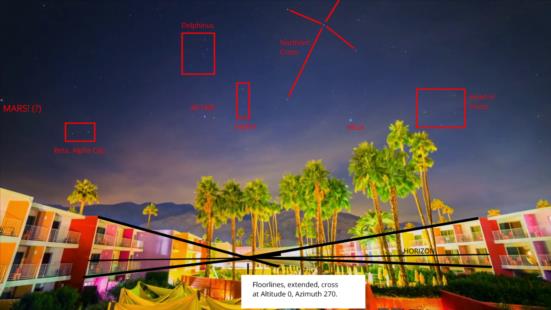 Incidentally, in a previous message I noted that the floorlines cross at the true horizon (altitude=0°) and at due west (azimuth=270°). I've discussed crossing floorlines to find the true horizon many times before, but this is the first time it had occurred to me that we can, in many modern cities (at least in the US), also assume that the vanishing point will be at one of the cardinal compass points since towns and cities are almost universally laid out along the cardinal directions. You can think directly about the image' sensitivity to latitude by knowing that we're looking due west. Changing latitude is a simple rotation of the sky around the west point.