Reply
Re: Latitude and longitude from a photo
From: Don Seltzer
Date: 2017 May 11, 21:22 -0400
I don't think that is the Big Dipper.  I am assuming that the bright mass of stars is the Milky Way, in a different part of the sky than Ursa Major.
And the photo is not a time exposure, or the stars would be streaks.

Thank you for your reply. I don't think the photo is enhanced except that it looks like a time exposure in some way. Maybe a really fast camera. Where do you see the "Big Dipper" in there?

I was doing some reading today, and I can see that there's no way to get longitude since there's no chronometer or equivalent time provided on the photo. But isn't there a way to find latitude from the positions of the stars??? 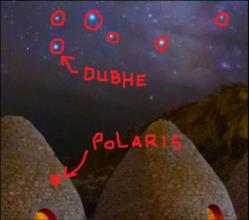