That star toward top right is Alpheratz. See the image below where I have identified most of the navigation stars that are visible. I have also marked the expected position of the Full Moon and the likely position of the zenith. It's useful that the original image size is 1280x960. This is exactly double in both dimensions the old magic value of 640x480 for an early "vga" resolution, and it probably guarantees that the camera, if properly leveled, would place the zenith near that middle pixel. I am assuming here that the astronomers who set up the camera made a good effort to point that central pixel at the zenith, or the camera's software is capable of making that adjustment on its own.

The azimuth orientation of the camera appears to be only roughly north-south. I would say its out of alignment by 10-15°.

We actually have a nice selection of stars here for a fix. And despite the image distortion, we can work them as relative altitudes with an unknown altitude error (like when dip is unknown). As in the GIF animation that I posted two days ago, there is only one value for the unknown altitude error that will yield a proper fix. I can say that Sirius is at "some altitude" to be determined. And from the image I can see that Betelgeuse is about 1° below the Sirius altitude circle. And Miaplacidus is about 1° above that circle (two days ago I suggested Avior, but Miaplacidus gives us a little more spread in azimuth).

In the second image below I have used my famous skills in image manipulation to edit out that big fat owl who was spoiling our view. I also ramped up the brightness and contrast to bring out the fainter stars, and I eliminated the skyglow from the Full Moon (*). And now we can see much more clearly how the stars and constellations are arranged from this location in Chile.

Frank Reed
* ...but don't believe everything you read on the internet; how else might I have created this image? 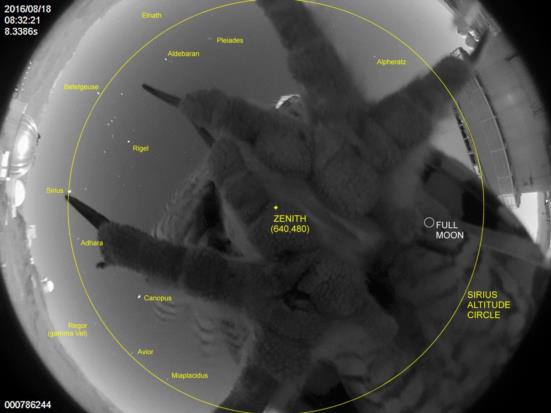 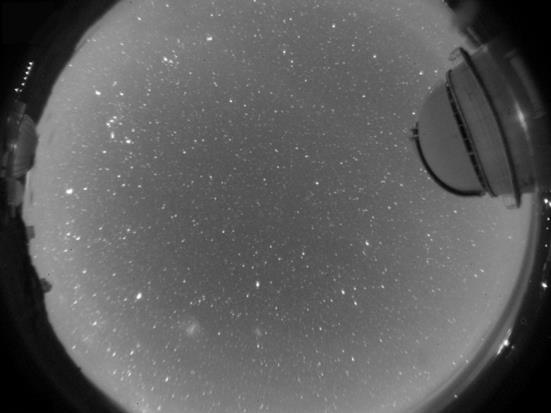