Glad you're enjoying it. That owl had no idea we would be looking up his tail feathers for entertainment.

You added:
"The photograph shows Orion rising feet first and so is taken in the southern hemisphere. The figure of Orion lies on the the celestial equator and runs and roughly north-south in the sky centred on R.A. of 5h 30m. Since he is seen here lying nearly on his side this can't be a long way below the equator."

Yes, I like to see this in terms of the Orion North Arrow (as in my post earlier tonigh). We can tell we're south of the equator and can even assert that we're at least 20° below the equator.

You continued:
"From the timestamp 2016/08/18 8:32:21 UT we know that Greenwich Sidereal Time (GST) is 6:19:00. The fisheye distortion makes things a bit difficult but a rough estimate might be that Orion rose an hour and a half ago . That would make the Local Sidereal Time (LST) around 1:00 and which makes the longitude LST-GST roughly 80°W."

Ahh, that's a nice approach to the problem.

I decided to do this by drawing circles of position for Betelgeuse, Sirius, and Avior. But there's no useful scale for altitudes and no real horizon. Yet I think we can assume that astronomers would properly level this all-sky camera so the apparent visible horizon is probably fairly good. Also we can estimate relative altitudes. Sirius is about 1° higher than Betelgeuse. Avior is about 1° higher than Sirius. Then we can just try out different altitudes, like 17°,18°,19° for Betelgeuse, Sirius, Avior respectively. Then 2° higher so 19°, 20°, 21° in the same order. And so on. It's like having an unknown dip. One set of altitudes will close the resulting fix better than the others. I have made an animation of this (GIF below). The red circles are for Betelgeuse, white for Sirius, and blue for Avior. It works best for a point in northern Chile very close to your estimate and the others which have settled, quite correctly, on La Silla in Chile.

Note: those circles don't look like circles because of the map projection, but these are just ordinary perfectly circular circles of position centered on the substar points for each of the three stars at the time of the sights. 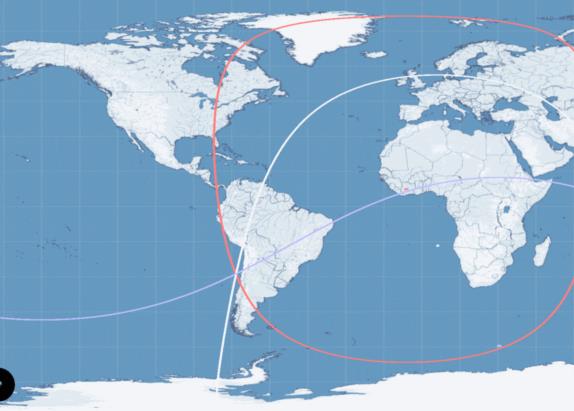