Yesterday at 5:15 EST, just before online "Office Hours", I observed the meridian altitude of one of the official navigation stars which I had never bothered to track down before. It's "Al Na'ir" as listed for decades in navigation tables. The IAU a few years ago accepted all the standard navigation star names as official names including such odious coinages as "Gacrux" but they simplified the spelling of Al Na'ir to Alnair. Since this is now the IAU-sanctioned name, I suspect the "official" nautical almanac(s) will adopt the adjusted spelling soon (could anyone check an official Nautical Almanac for 2020/2021?), and I am using that spelling in all my apps from now on. I also "fixed" the attached star chart.

The declination of Alnair is around 47° S. Given my latitude near 41.5° N, I can see down to a declination of 90-41.5 or 48.5 S. Refraction adds an extra half a degree so Alnair is visible. It works fine for latitude by meridian sight, with the appropriate corrections and since it's only visible when near the meridian, I was planning on looking for it then anway. I found it easily with binoculars. It was right at the limit of naked eye visibility thanks to the high extinction so low in the sky. I found it with my sextant, and there was no problem measuring its altitude: 2° 03'.

My exact location to the nearest meter: https://goo.gl/maps/nbuq9CF49amFY3xG6. Note that very narrow window looking due South. 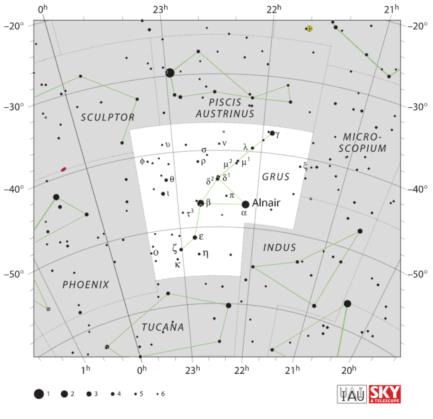