I tried the paper folding trick and interestingly it folds at about 1 minute earlier for LAN than my tangent line.  It is probably more accurate because the flatness at the top of the curve make it a little difficult to find the peak of the curve. The right-hand fold in the picture attached is the fold as you suggested.

I had thought I was looking at a parabola but when I considered it further it occurred to me that eventually the sun would come around the earth behind me closing the curve... so maybe an elipse I thought.  But it appears that a parabola for this section of line is close enough.

I am actually interested in the use of excel, and eventually a purpose built program using the algorithm in the Nautical Almanac, for two reasons. One.. it is pretty time consuming to make these graphs by hand.  Secondly, I am teaching a friend who is a "shooter" ie rifles, and he finds a huge similarity between sighting a target and sighting the sun on the horizon. The crazy round of second doubts when sighting a sun on the horizon and the target picture shooting a gun are similar. Did I "actually" get it on target when I said "mark"or squeezed the trigger.   We thought it might be useful to have a way of measuring the variability of our sun observations around the mean to see if we are getting better over time...or not. So far, we have determined that propping the arm on a table, as you might with a rifle, does enhance the accuracy of the shot.  When I was a navigator in the Navy back in the day sitting at a table wasn't even a remote possibility, for obvious reasons.  So, since I never go to sea anymore, I am a land-bound navigator.  At least the ocean is nearby!

Thanks for your input, as always. I follow this thread and am in awe of the knowledge you and your other contributors have.  Believe me, there is absolutely no one I personally know who knows the first thing about celestial navigation.  Their loss.... 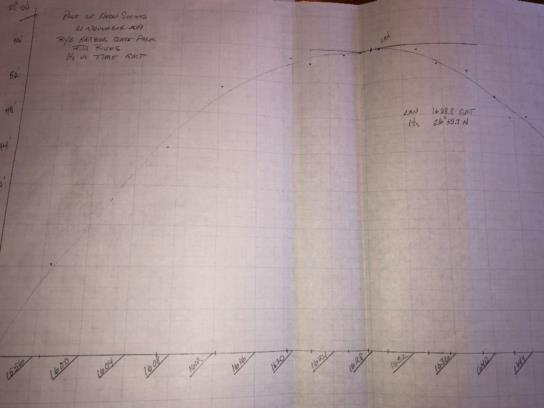