Today's a nice day to look for the planet Jupiter in daylight: for observers in the continental US and similar longitudes, anytime after 5pm, go outside with a pair of binoculars or a decent sextant scope and look at the Moon in the east. Jupiter will be to the left of the Moon and a little below, about three degrees away. Now lower the binoculars and see if you can spot it direct! Still can't find it? As soon as the Sun goes down, Jupiter will be obvious, and you'll see it near the Moon all night long tonight.

Could you use this for "longitude by lunars"? Traditionally, no. Whenever the distance for a particular body was below about 20°, lunars were more problematic for various mathematical reasons. Of course, after dark there are several other stars available, but none as spectacular and inviting as Jupiter. Also note that the Moon's motion later tonight will be nearly perpendicular to the direction to Jupiter. Therefore the angular distance changes quite slowly. The minimum is around 0320 UT (11:20pm EDT for us in the eastern US).

Here are the geocentric (corrected) lunar distances from Jupiter to the Moon's center for each hour of UT this evening (0000 April 18 is 8pm April 17 EDT):

I said "traditionally, no" for lunars above. But there is a relatively sensitive test you can try on your sextant this evening. Some micrometer drums suffer from a certain amount of "eccentricity". This is just like arc error on the main sextant arc but it applies to a single "lap" around the micrometer. You may find, for example, that readings at 30' of arc are always too high by 0.5' relative to the zero mark on the micrometer. This is not common, but I've seen it on a couple of older sextants. Shoot the Moon-Jupiter angle tonight as it varies. Record the angle and the UT for each observation as usual. Unlike with traditional lunars, the low rate is an advantage here. You can then clear the sights using my online tools: http://www.reednavigation.com/lunars/. Graph out the error as a function of minutes on the micrometer. Is there any pattern? Like arc error, this is a correctable error if it's measured and tabulated. More likely than not, your sextant has no micrometer eccentricity worth mentioning. But now that I've got you worrying about it... Ha ha. At least it's something new to try. 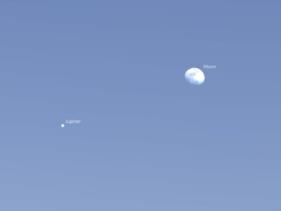