I'm looking at Venus and Jupiter right now, together in one field of view through a backyard telescope. It's two hours before sunset here in southern New England. Venus is brilliant and obvious. Jupiter is a pale disk almost lost in the blue sky. It should be considerably more obvious even an hour from now. And of course as soon as the Sun goes down, both will be easy.

The contrast between them is impressive. Venus and Jupiter are both shrouded in bright white clouds (alternating with darker bands on Jupiter), but Jupiter is more than 7 times further from the Sun than Venus so the sunlight falling on its white clouds is almost 50 times less intense than the sunlight falling on Venus (our distance from Jupiter only makes Jupiter smaller in angular size; it doesn't reduce its surface brightness --doesn't make it more "pale"). Below is my attempt to illustrate the view through the telescope. 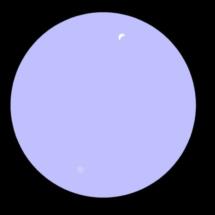