The quotation here is apparently drawn from a student's thesis (masters by M.L. Putnam) at Virginia Tech: https://vtechworks.lib.vt.edu/bitstream/handle/10919/91428/Putnam_ML_T_2019.pdf. I didn't read the whole thing through, but there's a lot of detail even if some of it may be questionable. And there are many good references, too.

The summary mentions that Taylor developed corrections for the oblateness of the Earth. As I recall, it turned out that this was quite a clever analysis, which was unfortunately wrong. Latitude is not a normal "spherical coordinate" in the usual sense that we learn about in math classes. It's a bit offset, by definition. Latitude as defined in geography and navigation is already adjusted to account for the flattening of the Earth, and no adjustment to fixes is required. Taylor (supposedly --I haven't checked!) published on this in the earnest belief that this was a new correction that would make navigation more accurate by some miles, but this was incorrect. Her later textbooks are as correct as a dozen others and cover all the expected topics in the mid-19th century, even lunars. Decades later, Shadwell treated her the same as any other author of a navigation manual and griped that she didn't give credit where due (an academic complaint in a commercial marketplace), as in the attached excerpt. You could find much the same complaint about Nathaniel Bowditch in the same era, for what it's worth.

The general historiographic argument, that Taylor has been ignored by history, seems to have become more true in the period from the Second World War forward. This was perhaps less the case historically. Many women navigated but of course they were certainly still exceptional, relatively rare. As for Taylor, she was one of the pre-eminent operators of a navigation school, and that's her real claim to fame since women could not own businesses in the era. Her navigation textbooks, her navigation school, her instrument work, while probably in the top ten in London, were not super-human achievements. Just plain good work. She did not change the world of navigation. She thrived in it. 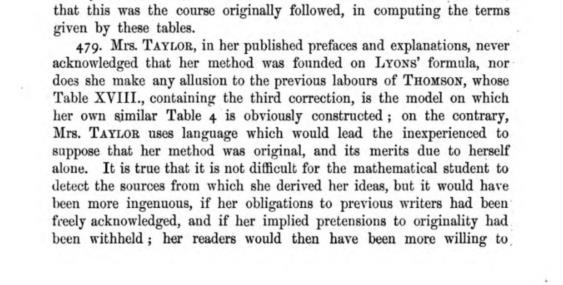