Vasco da Gama was the first to sail around the southern tip of Africa to reach India, returning home in 1499.  For most of the 1500s navigational information about the Indian Ocean and western Pacific was kept highly classified, helping to maintain a Portuguese monopoly on the spice trade from the East.

Jan Huygen van Linschoten was a dutchman who served as the Archbishop's secretary for 5 years in Goa, India, ending in 1588.  According to Wikipedia, he "meticulously copied top-secret [navigational] charts page-by-page. Even more crucially, Jan Huygen van Linschoten provided nautical data like currents, deeps, islands and sandbanks, which was absolutely vital for safe navigation, along with coastal depictions to guide the way. The publication of the navigational routes enabled the passage to the East Indies to be opened to trading by the Dutch, French and the English."

The US Library of Congress has a lovely scan of the 1598 English Translation, which includes both the text and charts produced by van Linschoten.

However, I find typographical elements of the 1598 edition make it hard reading.  In addition to using a Gothic font it has the conventions of printing:

Google has digitized an 1885 edition that uses modern typography and is much easier to read.  It is, however, text only and omits the lovely woodcuts included in the 1598 edition. 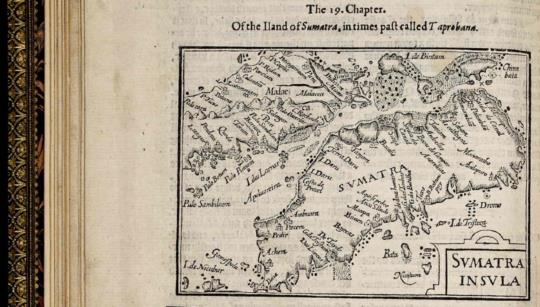 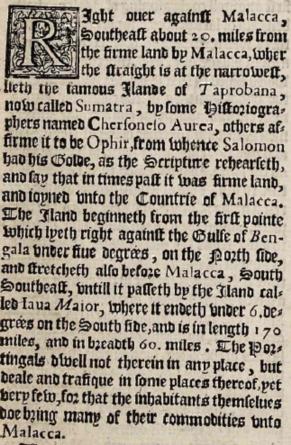 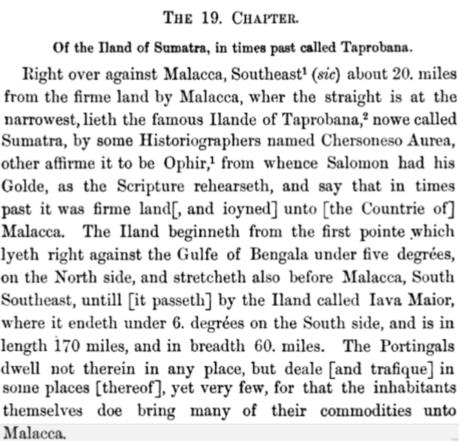