First a reminder: "DR" or "Dead Reckoning" is the process of determining your position based on course and speed through the water without reference to external navigational information like sightings of land or celestial sights. DR usually ignores currents in the water (though this is not a law, it is the "normal" sense of "dead reckoning")

There's an article in the latest issue of "Sailing" magazine in which a retired navigator talks about the good old days of celestial navigation, and how much better it was when navigators were seen as wizards. These kids today! Bah. Ain't got no respect! Etc.

He's got a lot of it wrong including expressing a fetish for a perfect crossing of three celestial lines of position --which does not prove an accurate fix! The author also uses the expression "ded reckoning" which is founded on an early 20th century folk etymology (or false etymology). He thinks he's being clever here. It's navigation "name-dropping". But it's wrong.

The phrase "dead reckoning" is natural nautical language. There's dead rigging, deadeyes, various "dead" things in the nautical world, and the word "dead" usually implies motionless. Similarly, a plausible origin of "dead reckoning" is that it is founded on motionless water ("dead water") and thus a DR position does not account for currents. But we can only speculate since there's no real "invention" moment for the phrase.

In the 1920s a letter to a London newspaper proposed that instead of being related to all the other "dead" expressions in nautical English, "dead reckoning" was a centuries-old "typo" for what was originally a shorthand of "deduced reckoning" and thus became "ded. reckoning" which was later mis-spelled as "dead reckoning". This is nonsense. It's a "just so" story --an attempt to craft a backstory for a phrase that puzzled new navigators in the 20th century.

This pseudo-explanation, ded not dead, became quite popular in aerial navigation where other uses of "dead" (like "dead rigging") did not exist. They needed an explanation so this (erroneous) one had legs. The Walking Ded you might say...

In addition to it being completely unjustified by history, the explanation doesn't even make much sense. The word "reckoning" just means a calculation or accounting, and any calculation is "deduced" so the supposed explanation as "deduced reckoning" would be redundant in the first place.

Finally, I should add that historically there were other expressions and on American vessels in the mid-19th century, the phrase "per acct" or the shorthand "by a/c" were just as common as "D.R." for the same course and speed derived positions.

And here's some deadeyes. Notice how they follow you as you walk around the room! 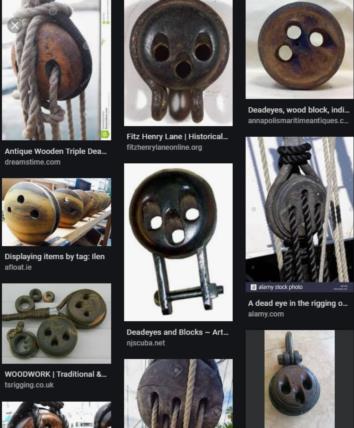