It's true that you can do this with a spreadsheet or many other coded options, usually all based on the algorithm that was published three decades ago in the pages of the Nautical Almanac (it's much older than that, but that's where most of us first encountered it). But the challenge, at least, I think so, is to develop some ability to do this plotting correctly even if you don't have a calculating device right at your fingertips. It's also worthwhile since it teaches us something about the science of this that often defies "common lore" and navigators' "instinct".

For example...
Consider the attached plot. There are three LOPs, labeled LOP1, LOP2, and LOP3 on optimal azimuths (separated by 120°) yielding a nice "cocked hat". The fix will be plotted dead center in the equilateral triangle. Now I take a fourth sight and it yields an LOP that passes through the center of the triangle and through the top corner. That's labeled LOP4 (the blue line). Does that shift our fix?? I think it's clear to most people that it does not. The fourth LOP passes through the fix from the first three, so it cannot change the fix. But now... reverse the order of sights 3 and 4. Now your first three LOPs all pass through a single point, nearly enough. Your heart swells with pride at the "accuracy" of your fix. When you take that fourth sight, you might actually ignore it, and most navigators would be very unlikely to place the new fix halfway from that perfect three-line crossing towards the fourth LOP. Yet we know from the original order that this is exactly where the fix goes. Our intuition is wrong.

And I must emphasize that this is not "academics". This is about learning the limitations of "common" intuition and replacing that with improved intuition founded on navigational science. If it only shifts your fix by a mile or two or three, does that mean it's irrelevant? No. It's no more irrelevant than any other component of the navigation calculations that can shift your position by that amount. If you knew that your height of eye was 16 feet, would you use 2 minutes of arc for a dip correction? No. Never. That would immediately introduce an error of two nautical miles in your work. We know we don't have to accept that source of error. So why ignore this sort of analysis if it can sometimes improve your fix by the same two miles? 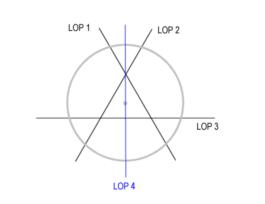