Well, I understand Einstein's take on time quite well, thank you! But I'm sure you would agree that it has no relevance to date line issues. :)

You continued:
"As you say it is just a crude map makers representation of a division - but it is a peg in the ground from which we can all relate to some sort of standard( though it is not that) - but it is a datum!"

But here's the rub: it is not a "datum" (except in the trivial and useless sense where a "datum" is any piece of information, right or wrong, useful or useless). The so-called International Date Line with its zigs and zags and sharp corners and a big diversion around Kirbati (see image below) is merely a convention, and it has been created in an entirely unofficial fashion by different mapmakers around the globe, usually copying from each other! It is a fantasy. It is fake. But again, I must repeat from my last post, the maritime dateline is a very simple thing: the meridian at 180° longitude. You cross that, and you change the date. Of course even here common sense prevails, and if you cross for two hours and then cross back, no one expected a date change in an official logbook for that brief sojourn. But the rule for crossing this maritime date line is established by long-standing practice and also international maritime agreements. By contrast, the "fake" date line that we find on maps and globes has no such standing, and when you cross it, there is no reason to change the date.

Let's compare with other mapped lines on the globe. Consider the equator, the prime meridian, the meridian at 71°58' west of the prime meridian, the parallel of latitude that is 41°22' north of the equator, the Artic Circle, the Tropic of Capricorn. All of these lines have a foundation in the science of geography. We can find them. We can delineate them to high precision, given certain definitions. Or consider the borders of countries and states and districts, which, in the modern world, are determined primarily by written law in terms of exacting geographic coordinates, or in the case of borders that shift with natural forces (like the borders of US states along the Mississippi River) by legal precedent interpreted by high-status legal authorities (the US Supreme Court, e.g.) who can declare where borders will lie, by legal agreement. There is nothing like any of this for the international date line. Its corners and segments are not determined by geography or by science or by legal agreements. It's just folks sketching in pretty lines on maps of the Pacific Ocean! Why not make rounded corners? Answer: go right ahead! Shining the best possible light on this fake date line, we can see it a useful memory aid that has been misconstrued as a real component of geography for far too long.

You wrote:
"As I was saying - our patrol area was huge - crossing back and forth in a single patrol the international date line numerous times - and eventually landing somewhere West or East of the date line and setting our local time by asking the time when we fist contacted the airfield we were nighting at - which could be - Cooks, Tonga, Fiji, or somewhere in the islands that could take a P3BOrion"

Well, you see, spot on! That right there is the point! There is no line out in the oceans that corresponds to the zigzagging date line that you will find on nearly all modern globes and maps. The points on those lines are not agreed upon, not ratified by any international body, and they have no legal, scientific or other formal standing. And when you crossed them in your P3, you paid no attention to them. They're just "cosmetic" lines drawn by mapmakers, comparable to shading on mountain ridges. And what really counts is not crossing some mid-ocean line, but, just as you say, asking the folks on the ground at your destination what time and date they use.

Probably the best recent example of this issue was Kawajalein atoll in the Marshall Islands. Kwajalein is in the eastern hemisphere, near 9°N, 167°E. By normal rules, it should be keeping the Asian/eastern date system. It is surrounded by the other atolls of the Marshall Islands which kept that eastern hemisphere date. But during most of the latter half of the twentieth century, Kwajalein was primarily a US military reservation, and the personnel stationed there were better served by keeping the American (western hemisphere) date synchronized with the date in Hawaii and the continental US. Kwajalein was an outpost of western date in the eastern hemisphere and completely surrounded by eastern date islands. So how did mapmakers deal with that?

Mapmakers who concerned themselves with the International Date Line fifty years ago simply ignored Kwajalein. Including it in the scheme would have required making a weird gerrymander or an exclave in the date line --a date island around that geographic island. That would have been "ugly" so they simply ignored it. But if you, in your P3, had been thrown a few hundred miles off course (heh! a long way), then of course you would chatted with the tower, asked for permission to land your very heavy glider (you probably ran out of fuel on final), and you would also have asked for the local time and date. Only then would you have learned (if none among your crew knew Kwajalein) that this giant atoll was a weird western date bubble on the eastern date side. You would not have seen this on any representations of the date line because none of them were official. And none of them are official today. The very "pretty" international date line that we find on maps today is a fantasy. It has no standing. There is no data behind its edges and corners.

You wrote:
"Nowadays I still talk 24 hr - and easily can convert to and from GMT to local - juxtaposing the different times - however, with auto synch watches and GPS - the mental maths is unnecessary. "

Right :). It's so easy now, isn't it? On the main display of my smartphone right now, it says that the time is 19:48 on Friday, December 31. This is Eastern time in the US. It's unusual, but not really rare, to display it on a 24-hour basis, and that's the way I prefer it, too. With a single flip of my fingertip I can switch from that clock to a dual time clock that shows the same Eastern US time and also informs me that the current time in Accra, Ghana is 00:48 on Saturday, January 1 which also happens to be the UT time and date (*).

* Why Accra? Accra time is UT: I recommend Accra to folks who want a UT/GMT display UT, if that is not directly available, because Accra is on the prime meridian, and it is also close to the equator so they have no cause to use Daylight Saving Time... thus the local zone time in Accra is always UT year-round]. 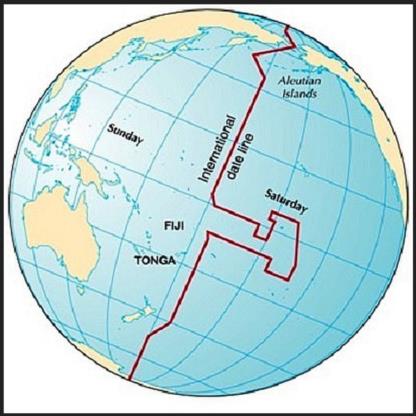