Fellow navigators,  A few months ago I came across a Plath Sun compass on ebay.   To my amazement I bid and won.  (  I think mainly due to no one knowing much about it – and for that matter neither did I ).
After some research I found out this instrument was used by the German military during WWII.  Seems it was very useful in North Africa when transiting across the desert, or setting the magnetic compass in an aircraft.  It has an ingenious 24 hr clock works that when set with GMT ( EQT applied), your Lat and Long it is able to maintain a true bearing ( or desired course)  via the sun’s bearing via the diopter located on top of the instrument.  The diopter focus the sun’s rays to a very fine beam of light.
Sadly when it arrived I found that the clock was in less than perfect condition.   I wound it, it ran for less than a day and failed.  In that time frame sadly I wasn’t able to fully understand the operation of  the instrument.
Enter Bill Morris:  I had in the past communicated with Bill on numerous topics and obtained nearly all the manuals he provides for repairing Aircraft sextants.   Given Bill’s vast knowledge I thought he may be willing to assist me in getting the Plath back up and working.
As luck would have it Bill visited the USA a few months ago.  Great!  I drove up the relatively short distance ( closer than New Zealand) and passed the Plath to Bill.  We enjoyed a nice visit as well.
Shortly after our visit the Plath  arrived back home via  Fedex…… I immediately wound it up, set the clock after further study on time setting -  bingo!  She works perfectly!   How did I know it worked?    In the past I’ve used an Abrams, Astro and Darra corrector sun compasses in my side line of magnetic compass correction.  After setting the Astro and Abrams the Plath was true to form exactly in line with the true bearings obtained by both.  The Plath of course has the added value of tracking without further corrections due to the 24 clock that drives the platform.  As long as the time remains correct, your DR (or GPS position) remains keen you can maintain any desired bearing.  ( unlike the Abrams and Astro that needs near constant correction to remain accurate due to the path of the sun).  An amazing instrument to be sure!
Without Bill’s help  the Plath would still be on my display shelf in the study wondering how it worked..
See photo…. Someone seems to have taken good care of it for the past 70 plus years. 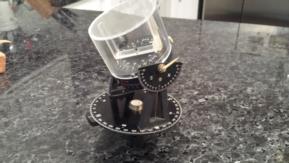