I’ve been playing around with a vintage Link A-12, and I’ve discovered a few things about it that might be of interest to fellow bubble sextant users. I came up with a couple of hardware modifications that improve the usability quite a bit, and a new technique for more accurately taking star shots. The latter would probably work with any bubble sextant, not just the A-12.

My interest in the Link A-12 stems from my fascination with taking star & moon shots, as opposed to the sun. (Go figure.) Alas, I’m a few miles inland, and my wanna-be practice bubble sight jury-rigged on to my wanna-be Davis 15 sextant has serious limitations in this area, so eventually I took the plunge & forked over $100 for a sight-unseen used Link A-12 on the internet…

…Six months later, aided with a Bridgeport mill, lots of luck, and the invaluable advice from some of you (Thank You, Thank You, Bill S.) I ended up with a fairly passable refurbished model A-12. Six months after that, I managed to teach myself how to use it.

What I found, was that the unit has some serious limitations when used at night. For one, the lighting system on the index vernier scale seriously sucks, at least as far as my 55 year old eyes are concerned. So I replaced the old filament bulb with a red LED drop in replacement*, and ended up with something I could actually read in the dark. But by far my biggest gripe was that the backlight for the bubble cell really doesn’t work at all. What you want to see is a uniform luminous background, preferably red, where the bubble stands out as a nice black circle and the star is clearly visible as a small white dot. What Link provides is a far cry from that.

Because I’m an engineer by trade, I am genetically disinclined to leave well enough alone – especially when “well enough” doesn’t really work in the first place. Luckily, the lighting system in the A-12 is a small flashlight-like affair that can easily be removed. So I designed a small cap that fits over the light bulb which does the trick. (See the attached shot.) It backlights the bubble cell with a uniform red glow. I’m having a really hard time figuring out why the good folks at Link didn’t think of this 70 years ago. Works like a charm.

But what I found when I used it was that accurately centering the point of a star in a circle is pretty difficult to do in practice. There was a lot of scatter in my sight reductions - the size of the bubble spans about 1o field-of-view, and you are trying to find the center to within an arc minute, or 1/60th of the bubble diameter. Good luck with that. In theory, if you know the size of the bubble, you can line up the star with its top or bottom and calculate a correction factor, similar to using the sun or moon’s semi-diameter. But the problem lies just there – you really have no idea how big the bubble is, since it varies each time you fill the chamber. So after a lot of patience & frustration, I came up with a really simple solution: The A-12 is equipped with a recording drum which was designed to record a series of shots so they could be averaged out later. I can use the drum system to take the average of two shots – one with the star at the top of the bubble, and one at the bottom.

The way it is designed to work is there is a replaceable white plastic drum that you use as a knob to turn the index arm. When you want to take a sight, you push a lever, and a pencil scribes a small mark on the side. You make an odd number of sights in rapid order, and make a note of the time for the middle one (e.g #5 of 9 shots). Later on you go back and line up the middle scribe on the drum with the pencil and read the corresponding index angle off the vernier scale. What you end up with is something close to an average of all 9 shots, along with something close to an average time. Crude perhaps, but it’s really simple mechanically, and it’s much better than nothing.

My idea is to use the drum to make two shots in quick succession: one where the star is lined up with the top of the bubble, and one with it at the bottom. Both shots can be done pretty accurately, and you then just average the two index angles to calculate the center. Ideally you should also note the time for each shot, but if they are done quickly enough you can slide by only recording one of them and fudging a few seconds for the average.

With a little practice, I found that my scatter is pretty close to what I get when taking sun shots – which means I can go back to my routine of taking three shots and possibly tossing the odd one out before averaging the other two. Usually they are close enough so I end up just averaging all three. 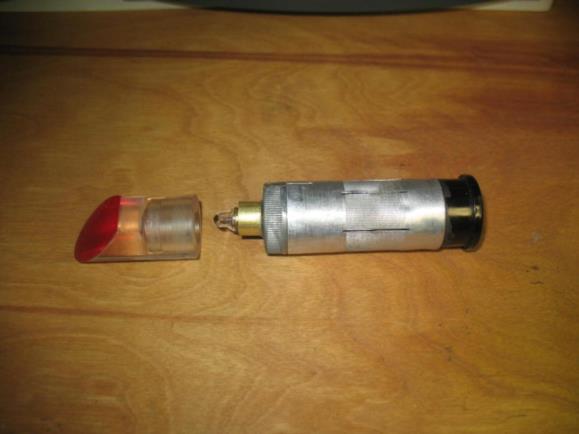