It was brought to my attention that it is best to filter telescopes (especially high magnification) from the objective lens rather than the ocular lens. The linked image shows a custom fitted disc of solar film which fits snug in front of the 40mm objective lens. The threads on the inside of the scope tube at the objective end are sufficient to hold the film firmly in place. Getting the film removed is done with the end of a sharp pencil.

What happens when filtering is done at the ocular? Well when I was a once upon a time junior third mate the second mate advised me to not leave my sextant sitting in the Sun at the chart table because the Sun at some point will focus through the sextant scope for a prolonged period of time and ruin the lens coatings. In spite of this advise I managed to ruin lens coatings on two different scopes. The scopes still functioned ok but the light gathering was probably reduced. So if the solar mylar film is placed at the ocular end of the scope and the sextant is left on the chart table in the Sun by the navigator then the solar film will degrade (in addition to lens coatings). 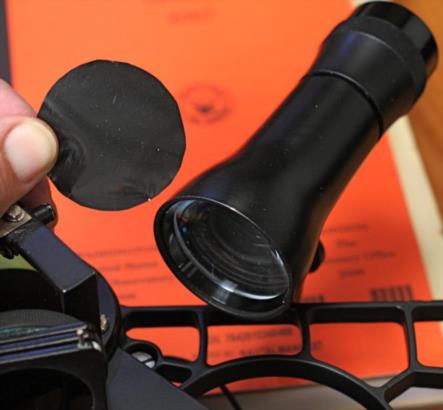