Yes indeed. I posted about this on September 15, but they issued yet more official names that week. I just checked the official IAU list against the standard list of 57 selected navigational stars from the Nautical Almanac. All of the standard navigational names in their usual spellings are now official IAU names, including the rather silly coinages like Acrux and Gacrux and Atria, with one exception: the spelling Alnair is now the official star name in preference to the Nautical Almanac's Al Na'ir. Apart from that spelling difference, the whole list of 57 (+1, Polaris) can now be considered as official names and effectively permanent names even outside the world of celestial navigation.

Last week I did a planetarium presentation on the Apollo spacecraft sextant and navigation to the Moon at the Wickware Planetarium in Windham, Connecticut, and as a sidestory I wove in the tale of the names of the stars Navi, Dnoces, and Regor (which you can read about here if those are unfamiliar). These names have not become official star names, but they were included on star charts for many years. I also talked about the similar star names Sualocin and Rotanev, two rather faint stars in the constellation Delphinus. You can read about those names here. It's interesting to note that those names are now counted as official IAU names. Even pranks can become official if they linger long enough! 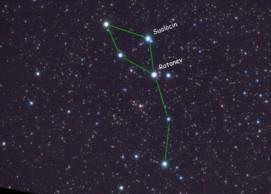