You wrote about using a ball bearing to level a mirror.

Here is my reason why it didn't work.

The vector of force pulling the ball horizontally has a magnitude inversely proportional to the angle of the mirror.  The closer to horizontal (or zero) you are, the lesser the magnitude.  The further from zero, the greater the magnitude.

So in the absence of frictional forces, this would be okay.  No matter how small the horizontal vector, the ball would roll in that direction of the angle.

In the real world, there is friction between any two surfaces.  The amount of resistive (friction) force is a function of the coefficient of friction between the two surfaces and the force between them.  In this case, the downward gravitational force on the ball, multiplied through by the coefficient of gravity *is a greater force* than the horizontal force vector created by gravity and the incline of the mirror.

Since the frictional force is greater than the force trying to cause motion, no motion occurs.

So by this we can see that the ball will work for larger angles, but not smaller.  Since the purpose is to get a zero angle, this can never work.  That is, unless you find a zero friction device (like an air bearing....think air hockey)

I carefully leveled the mirror with a Starrett machinist level inside where it was warm and comfortable, everything on the table, and to within less than half a mark. It was difficult to touch the adjusting screws, much less turn them, without moving the bubble. I have a ½” thick plastic base with three rubber feet that is spot drilled on top for the three adjusting screws with ¼-20 threads. The screws are a loose fit and very easy to turn but the coarse threads make final adjustments exacting.

Anyway, I adjusted as precisely as I could with the level and put the ball bearing on the mirror. It didn’t move. Good job! Photo – Bearing on mirror. Then I moved the single end screw a tiny amount – Mr. Bearing still didn’t move. More - nothing. I think I finally turned the screw about one full turn before the bearing rolled. Photo – Level after bearing moved.

I cleaned the glass again – same result. I think that these ball bearings are in the very good class although there are some NASA class ones available.

I had visions of the perfect AH with a tiny hole drilled in the plastic base for storing the ball bearing “level”. At this point I don’t think that will work.
Regards, Noell 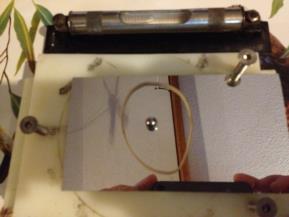 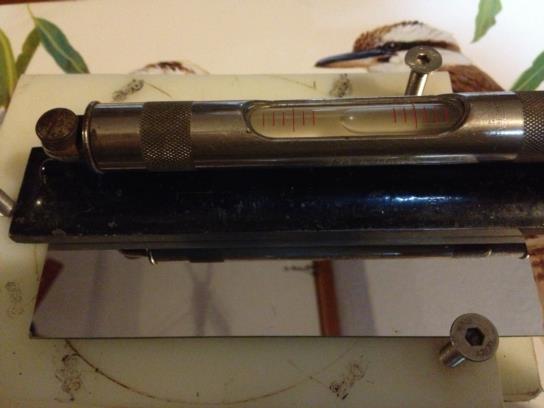