There are some significant bits of knowledge underlying this model. For example, we need to know that the phases of the Moon and a lunar eclipse are distinct things. People with knowledge of astronomy know this, but it is not immediately obvious to everyone, and if you ask your friends you may discover that most of them have the two phenomena mixed and muddled in some way. Also, it is not obvious without significant astronomical knowledge that lunar eclipses occur if and only if the Sun and Moon are perfectly opposite each other on the celestial sphere, especially since this model requires us to visualize the Sun when it is below the horizon. Of course, once we know this, lunar eclipses are easily predicted, so the concept is easily proved by those predictions.

How many cultures historically independently understood the causes of lunar eclipses? How many philosophers in those cultures independently recognized the significance of the shape of the Earth's shadow? And how well was this model understood in cultures which should have known of it as part of their historical legacy? One could argue that if the logic was obvious, then every culture on Earth through all of history should have been aware of the roundness of the Earth and should also have been able to predict lunar eclipses with some success. But I don't think that's the case.

Finally, here is a photo of a "lunar eclipse" (no it isn't!) from the recent Netflix film, "The Dig", which is a romanticized account of the excavation of the Sutton Hoo ship and treasure. The film has its moments and some very fine acting, but it is also rather dull and rather dependent on silly romantic sub-plots. Like many recent Netflix films, it seems to me that strict budget constraints left editing and post-production unfinished. Showing a proper image of a lunar eclipse would have been easy, whether from an actual photo or a quality simulation. There's no excuse for substituting a crescent moon. It's just sloppy. I'm not nitpicking here over the science. This is about film. If the image didn't matter, then why show it at all? Incidentally, there are a number of astronomical references in the film since our hero, the digger, Basil Brown, was an accomplished amateur astronomer and had written a book on astronomical catalogs, which gets a mention in the film, too. 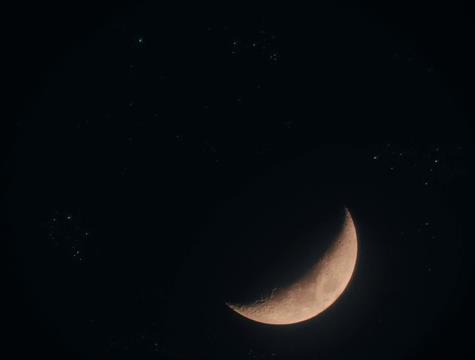 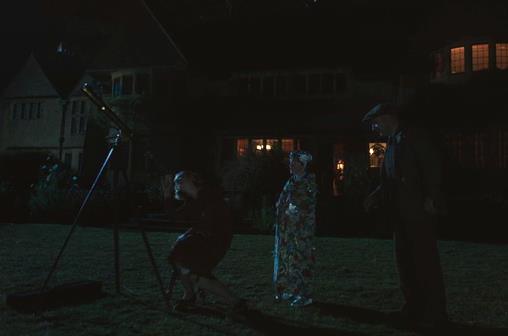