My Casio Pathfinder PAW-2000T is a radio controlled watch. It is capable of receiving signals from no less than six transmitters worldwide, depending on what time zone you set it for. One of these transmitters is in Fukushima, Japan. I was curious to see if this particular station was still transmitting since the earthquake and tsunami. Sure enough, from what I could find, the station is down and will not be up again for the foreseeable future.

While searching this topic I came across several articles about a London watchmaker who is apparently developing a true pocket atomic timepiece. According to the articles, "The watch will use a Quantum SA.45s 'chip scale atomic clock' developed by Symmetricon for military applications in drones and cruise missiles."

The press release goes on to say, "The No.10 watch has a self-contained accuracy of one and a half seconds per thousand years." and, "The watch will have a formidable number of complications. The front dial is designed for marine navigation. With the aid only of a sextant, it can determine longitude to within a nautical mile, even after years at sea."

Unfortunately, it concludes by saying, "Only twelve examples are due to be manufactured initially, costing 'well into five figures'. Customers will also be subject to security clearances due to the nature of the device."

Is this for real?!

Articles can easily be found by searching the subject of this message. The one containing the press release can be found here:

Attached is a picture of a "proposed" face showing twenty-eight (!) hands on twenty dials and what they indicate. This would be an awesome thing to have if it were indeed true. 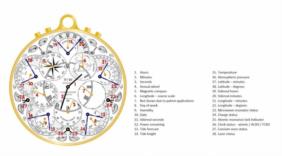