"I wouldn't be at all surprised if the current presidential planes had these mounts. Can't be jammed like GPS and passive, no electronic emissions to attract attention."

Of course the logic you give, "can't be jammed" and "no ... emissions" would be covered very nicely by an automated celestial turret, like the ones we have known about for years that were fitted in the SR-71 and later the B-2. No need for a human observer.

Naturally, a potential AF One should have every option... They're building one not far from here. Two years ago, someone landed an Evergreen Aviation 747 at the Quonset Airport (the old Naval Air Station). It's probably the only 747 that has ever landed in the little state of Rhode Island. Within the past few months they have made good progress converting it into a doppelganger of the presidential aircraft commonly known as "Air Force One", as you can see in the photo below. They say they're going to make a museum out of it. Not much else one could do with a duplicate of Air Force One.... :) 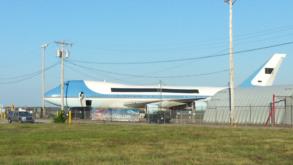