I've opened a new thread, because this particular line was getting a long way from Polhemus.  Frank you wrote:

As I noted in my earlier post, those volumes 2 and 3 of pub.249 were so very different from volume 1 of 249 that it's easy to think that they must have been an entirely different publication, and indeed it would have made sense if the H.O. (the "Hydrographic Office" which was responsible for numbering these things back then) had given a different number to volumes 2/3. But they did not. They were listed as part of HO249. ................ you're not alone in getting these numbers confused, and it's really a shame that these are the dull and undescriptive names we are stuck with for these products. But we are stuck!

I think you have to look at this in the context of the time. Volumes 1, 2, and 3 were produced between 1947 and 1953.  People had just fought a long war in which air navigation had developed tremendously in both technique and volume.  People were preparing for a bright new future in all areas of air navigation.  The production of the tables under one reference number probably wasn’t a woolly headed bureaucratic decision.  The specification was agreed by representatives of the USAF, RAF, and RCAF.  Many of the reps would have used celestial in the air; have known what techniques had developed; what was possible in the air; what the problems were; and have firm ideas upon how the subject might develop in the next couple of decades.   They would have included the likes of some of the ‘greats’ who emerged during WW2 such as, Dickie Richardson author of the 1941 edition of AP1234, JED Williams, and David McKinley, Kenneth McClure and Andy Anderson of the Aries Polar flights.  When complete, HO249 took the existing 18 was it (Gary will confirm!) volumes of  AP1618/HO218 and transformed them into just 3 volumes of HO249/AP3270.  With just a current Air Almanac, these three volumes, a watch and a aircraft sextant (preferably periscopic), celestial could be performed in the air anywhere in the World.  For those with access to CUP, the history is well described by J E D Williams in the Journal of Navigation, Vol 41, No3, p388-390.

I have to admit the fronts of HO249 do look rather dull and easily confusable. The Brits got around this by banding Vol 1 (Stars) red, Vols 2 and 3 (Sun and Planets) Vol 2 green and Vol 3 yellow.  They were known universally within the RAF as the Red, Green and Yellow Bands.  To me, yellow meant Sun shots (naturally), red meant star shots, and green was only used in places where the butter melted.  I didn’t even notice they were called AP3270 until I started following this forum.  DaveP 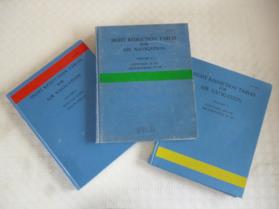