I wonder how much was actual error on Stonington vs datum shift.  I have charts post 83-84 and had looked at earlier charts and seen the adjustment on NOAA charts at that time. Seaflower is so very close to 72 degrees, and near enough to a latitude line...it was a good point to compare.  I remember my father telling me about datum changes and I went to compare the charts back then...the difference was noticable with careful inspection.

Such a great site you mentioned...The charts clear enough to read...yes!!!  I will be lost there for hours too....... Must have been maddening back then to map so tediously....whew.....It says how important a region this was.....a critical part of the Nautical economy..fishing...building....  I will see how it prints and see if I can get an overlay put together and share it....

Such a chord resonates with the beloved old Pendleton! Last of the great Noank schooners (five masts in her day).  My uncles fishing boat was on the wooden docks looking right at her in the 60's & early 70's. As we unloaded or ventured out in search of fish..  It enchanted me..it spoke of bygone days and started my interest in historical ships and navigation.......

I uploaded my Pendleton Treasure.  A painting left to me by my Grandmother, painted by TW Dahl on Groton Long Point. She was given it in the 1960's   I was told the frame was made out of her timbers by a local artisan.  It hung in her home for decades, and she gave it to me in the late 1990's before she died, as she knew I had such deep love of the old wreck.

It now is among my nautical treasures, sextants and books.

It burned wrecks and nautical history into my interests for life...as evidenced by this poem I wrote.after a dive on a sunken fishing trawler.....if I might be permitted a small sentimental diversion from CNAV.... perhaps she went down to navigational error?

The pilothouse seems cloaked in gloom
it has an eerie feel
Is that the helmsmen's ghost I see?
in the shadows aft the wheel

The ghostly light gives fancy flight
of a pilot cursed to be
On a voyage through eternity
to a port he'll never see..... 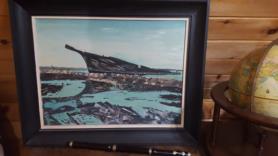