Mark Coady, you wrote (in the GPS jamming discussion):
"Your chart explanation brought me back to another question I was pondering and saving. I attached a jpg of an 1847 chart of fisher's island...it set me to thinking... considering this has been my home port stomping ground, off and on...since I was a child....I looked at this and was stunned to see how well defined it seemed to be...and presumably similarly accurate?  I hope to print it on tracing paper and overlay it on a similarly scaled modern chart at some point. I should be able to fudge scales using the legend."

I would love to see that comparison. It's an amazing chart, isn't it? When you see your home waters mapped out with such clear accuracy from survey work done in the 1830s (before the Charles W. Morgan was built!), it's really striking how much time and effort they put into it. I can imagine that long season they spent working slowly up and down the length of that sound, measuring every point of land and asking local contacts for every known rock and shoal. There are some areas that have been filled since then, of course, but even small details are unchanged today in many places. For example, look at the small island in the cove north of Noank, often called "One Penny Island" in comparison to nearby "Six Penny". It's more or less the same today despite 180 years of erosion and slowly rising sea level. The outline has only been sketched in, I would guess. They wouldn't survey a feature like that, but the location is correct.

For another rendition of this same chart, visit the Coast Survey's Historical Map & Chart Collection. Here's the main index, and here's the specific entry for the 1847 Fishers Island Sound chart. This site is a goldmine. I've spent entire days lost in there!

You wondered:
"In the mid 1800's.. how much of this might have been astronomical vs surface trigonometry and surveying. "

They say so on the chart (much easier to read in the version linked above): this was a trigonometric survey, which means that it was almost entirely a queston of measuring horizontal angles between recognized points and poles held by assistants. The note appears to say that the primary survey was conducted in 1835.

Imagine bringing those surveyors forward through time to the present and handing them a pair of cell phones. They would instantly see the benefit of being able to talk to each other across the sound while doing their surveying work --a huge and obvious practical advantage that they would understand right away. Then you show them the GPS capability... and they fall to the ground in awe. What witchcraft is this!? Then you explain that there are little artificial moons above the atmosphere, launched at vast expense many years ago on rockets, and they're sending out invisible "electro-magnetic" signals, and the phone "hears" the signals and measures the delay of their arrival, and from that triangulates its position on the ground. Then they see the light, get off their knees, and realize that it's all just good old-fashioned mathematical surveying writ large. Science now rules the Earth, ignorance is banished, and it is a world at peace (we can fill them in on the unfortunate details later...).

You'll notice that on this very early chart, there's only one point that's given an exact latitude and longitude. It's the lighthouse at Stonington Point. That lighthouse still exists, now a museum, and we can compare the location on the chart with a modern position. According to the chart, the lighthouse is at 41° 19' 37" N, 71° 54' 40" W from the details at the upper left, but the longitude is 4 seconds less by the notation on the bottom of the chart. Visiting Google Maps, the lighthouse tower is clearly visible. Right-click or option-click, select "What's Here?". Then when the lat/lon are displayed, click that. This last step, as I discovered recently, does an automatic conversion to minutes and seconds in the panel on the left, which is convenient. The "correct" coordinates (as would be surveyed from GPS signals today) is 41° 19' 42.5" N, 71° 54' 20.0" W. We see that the error in that position from the better of the two positions given on the 1847 chart is only about 1300 feet (400 meters) or 1600 feet from the other position. Quite impressive! --Especially when we consider that most New England ocean-going vessels were still using lunars for longitude at the time the survey was made. No doubt the Coast Survey had access to a few excellent chronometers for their work, but these chronometers were not yet the norm. While it's certainly possible that an astronomical determination of position was made right there in Stonington, it's also possible that a large area triangulation effectively transfered an astronomically-determined position from New York or Boston perhaps. The astronomical position is the end of the chain; the links in the chain to local features are made by ground survey triangulation. Incidentally, the deflection of the vertical is close to zero in this area so you don't need to consider that difference between astronomical latitude and longitude and geodetic.

PS: I'm attaching a photo of the Alice L. Pendleton. This 225-foot four-masted derelict schooner used to be an icon of Fishers Island Sound. Launched in 1917 as the Happauge for the coastal lumber-hauling trade (note the large, rectangular loading ports on the bow), she was sunk by a U-boat in 1918. Though she capsized, she floated on her cargo and was salvaged and re-launched under her new name. The coasting trade dried up during the 1920s, and the vessel decayed to an un-seaworthy condition during the Depression years tied up at Noank. She sank into the mud near the southeast end of Noank Shipyard and weathered into a ghost ship that looked like it had been spirited away from the schooner graveyards of coastal Maine. In the 1960s and 70s, the Pendleton became a symbol of Noank. Eventually small disasters of fire and hurricanes combined the steady attrition from tides and waves, ice and wind degraded the old ship until it was little more than a mountain of debris. The shipyard got approval and had the remains dredged up and hauled away, and by 1985 there was nothing left. I have a foot-long chunk of the Pendleton with a rusty spike through it as a souvenir. The location is now the southern end of the marina on that side of the Noank peninsula. This photo was taken by my mother, Barbara Collins, in about 1969. I have had the original hanging on the wall of my apartment for many years. 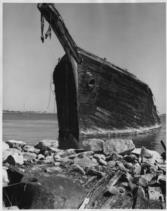