Tony, I don't have a specific answer for you. Maybe Lars Bergman or someone else has reverse-engineered this method? I haven't spent any time on it for several reasons:

If you want an approximate clearing of a lunar to get GMT, you can do it in a few very short steps with a calculator (or logarithms), and I suspect this graphical method is an implementation of the P1 and P2 part below:

And that's it. You have cleared the lunar distance and determined Greenwich time ...approximately. I suspect that the graphical method is an implementation of the calculation of P1 and P2, but that's a guess. Limiting ourselves to altitudes above 20° and lunar distances above 20° the third correction that we skipped leads to errors in the clearing of around 1 or 2 minutes of arc but more for larger lunar distances. Every minute of arc error in clearing the distance corresponds to two minutes error in Greenwich time which implies 30' error in longitude. That can be acceptable for certain narrow purposes but clearly skipping TC is not a good idea!

Many standard series methods of clearing lunar distances were based on this short computation, and a variety of tables for the "third correction" were published including the well-known Thomson Tables. Note that P1-P2 is simply the "linear" part of the Moon's parallax in altitude that acts along the lunar arc while the third correction (TC) contains all the small details including refraction for both objects and "quadratic" corrections. When done right this process is slick. It is indeed the fastest, bestest, and easiest way to clear lunars. I think it's clear that the short calculator or logarithmic computation required to get P1 and P2 probably takes no more time --and quite possibly less time-- than the careful drawing of arcs and lines required in the graphical approach published in Hints to Travellers in 1883. 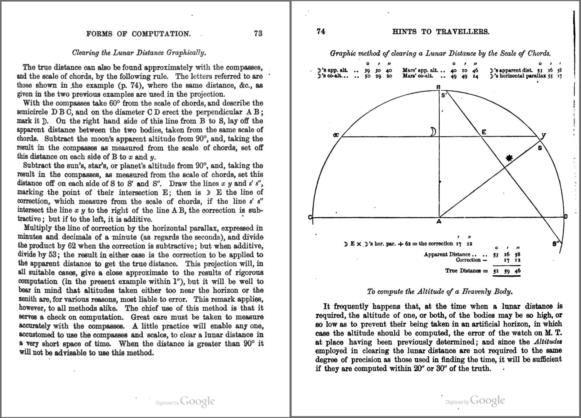