The NASA pen wins over the Paper Mate but loses the value contest.

You wrote:  "It brings to mind a 'technology' discussion I had yesterday with a pilot friend. He said NASA spent millions trying to develop a pen which would work on a space craft or low gravity field. Finally someone said 'Use a pencil.' Maybe true...... maybe not."

It's a variant on an old "email forward". It's not literally true, but it's an appealing story, right? If you go to the standard Google search and type "NASA space pen", Google's predictive search will fill in "NASA space pen russian pencil" followed by "NASA space pen myth". The top result is from snopes.com, still the Internet's leading source of urban legend debunking: http://www.snopes.com/business/genius/spacepen.asp. The Wikipedia article on the "space pen" also covers the "urban legend" aspect of the story.

The concept is, of course, perfectly reasonable even if the "space pen" parable isn't an actual example for it. Indeed, look no further than the "space sextant" commissioned from Kollsman in the 1960s which was used to shoot lunars aboard Skylab in the early 1970s. It was a complete waste of time and money. Actually, I suppose in that case, the lesson is opposite. Technology had already superseded the utility of the handheld sextant, but bureaucratic inertia remained focused on it, in one very small corner of NASA's sumptuously-funded Apollo-era bureaucracy, thanks to its appeal as a "simple" solution. 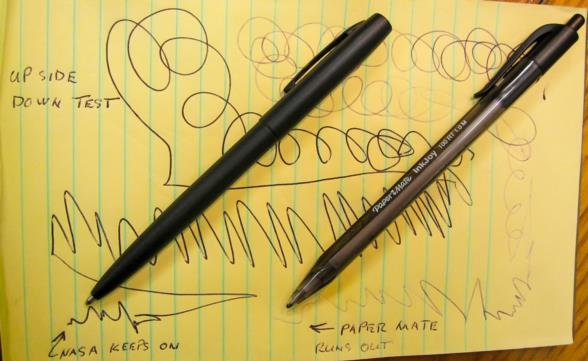