Greg, you wrote:
"Did you happen to notice that the bow shadow of this airship is four stories higher than the stern . This is going to mess with the geometry."

I did notice. I pondered. And I decided to ignore it. :) This whole area is also rather steeply sloped. The Thames River is a few hundred yards NNW from these buildings, and the Greenwich Observatory is just a short distance SSW. The Thames is at the low point in the terrain, and the observatory is at the top of a steep hill. So the "height" of the airship is also indefinite on that score. We can be rather accurate about the slant height from the middle of the shadow, but everything else involves geometric assumptions.

Thanks for the link to the youtube video in your next message. You called it the "Stella Zeppelin". I've been itching to do a little image editing and turn it into the "Stellarium Zeppelin"... Don't get me wrong, I like "Stella Artois", but I need a Stellarium zeppelin.

And now for another zeppelin shadow. Once again, I googled phrases until I found something interesting. It's a photo (see below; attached) of the shadow of one of these modern zeppelins passing over some low buildings that are presumably on the edge of an airfield --since there's an old airplane on the ground there. I decided to see if I could sleuth it out and figure out what we were looking at. I enjoyed the process, so here are my steps:

​Now how high was the zeppelin when the photo was taken?? 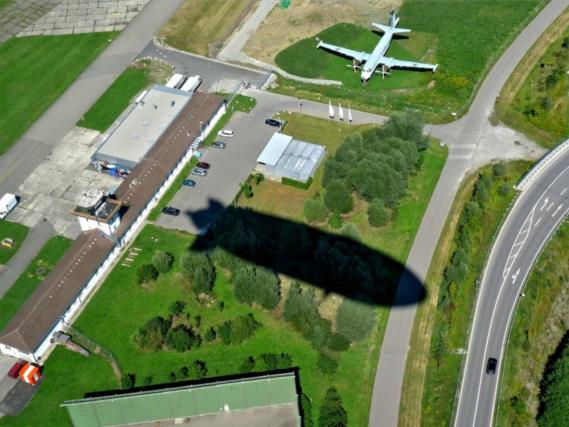 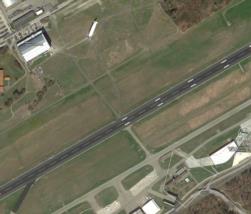