You wrote:
"If the camera is known to be linear (or linear with some gamma), curve fitting could be applied to the edge. "

That got me thinking. I agree that finding the edges of the penumbra is, at best, a rough estimate. Your suggestion got me thinking about ways to improve the "eyeballing". I tried looking at pixel intensities in an effort to get the size of the penumbra more objectively. This increased my estimate of the slant height in this photo to 900 feet, and so I estimate the height above ground at roughly 750 feet. Looking more closely at the photo with the airship shadow, I notice that there's a shadow of a light pole that is almost perfectly perpendicular to the painted lines on Romney Road (I think that's the right road there). This places the azimuth of the Sun near 151° and locks the time down more exactly at 11:03 am plus or minus a few minutes. The altitude of the Sun was 57° at that time of day on a date near July 10. 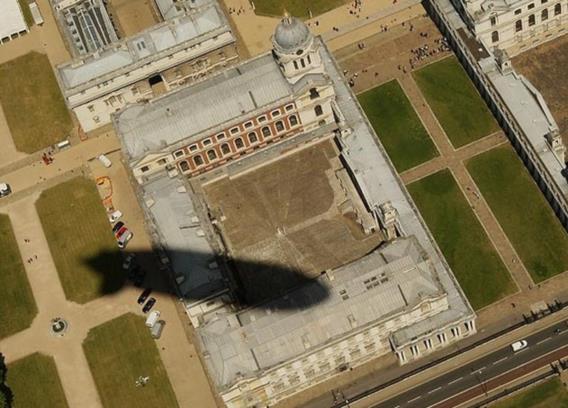 I have tried to make an image illustrating the geometry (see below; attached). I took a Google Maps view of the area and pasted in an image representing a "Zeppelin NT" like the one that was sailing over Greenwich that day. The airship is about 750 feet high directly over the northeast corner of the main exhibit building of the National Maritime Museum. The shadow is cast over the buildings roughkly 500 feet north of there (the shadow really should be split into disjoint pieces but I didn't bother making that happen). I've added two pairs of lines trying to show the half-degree angular diameter of the Sun, a bit exaggerated, which is responsible for the "fuzzy edge" of the penumbra of the airship's shadow. That width on the ground is the key property of the shadow that makes it possible to estimate the height above the ground. Higher up yields a wider penumbra, a softer edge on the shadow, as a fraction of the total shadow. This is something we've all probably experienced in an airplane as it lands: the shadow sharpens as we approach the ground. This is a real, objective measure of distance. The width of the penumbra, in feet or any other linear distance unit, multiplied by 107 (on average), gives the distance to the object casting the shadow in the same linear distance unit, assuming that the Sun or Moon is the light source. 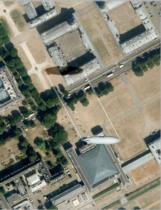