Don, you wrote:
"Frank, are you sure about the camera height? In the first photo, the ship is fully hull up, with a water line that is closer than the horizon."

That's an illusion of some sort. As Hewitt joked, if that was really the waterline, the ship would be a monster. After I saw your post, I decided to get a few more photos of it sitting out there maybe with different lighting. I had checked a few hours earlier, and it was still anchored in the same spot. But when I got to the cove, there was some big ship headed directly towards me, and the ship on the horizon had vanished. Clever detective that I am, I deduced that the ship heading inbound must be the very same ship formerly on the horizon. Call me Sherlock Holmes. Nevertheless, I checked my deduction with the marinetraffic app and sure enough, the "Star Express" was heading in at 10 knots. I drove first to the entrance of the East Passage and then to a vantage point southwest of the Newport Bridge and was able to grab a couple of photos that should give you a better idea of the scale of the vessel and should make it clear that much of the vessel was behind the horizon in that first photo from yesterday. 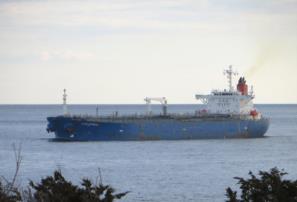 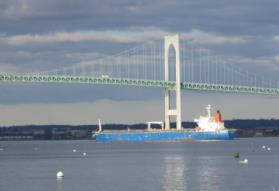