We have talked here before about Harold Gatty's "The Raft Book".  It contains a couple of enormous charts that embody a wealth of navigational information.  Happily, the Stanford University Library has made high resolution versions of these charts available for download at no charge in the JP2 format (scroll down the menu on the left to the bottom) here:

I have converted these to the more common JPG and uploaded them here to NavList.

The striking thing I wanted to draw to our attention is at the bottom of the first chart, the map of the world.  There appears to be instructions and a scale for a kamal.  Frank has talked here about using a 3x5 card as a kamal, with equal divisions between degrees, which means that it can be fairly accurate for objects within 15° of the horizon.

Looking down at "The HARP Scale", it does not have equidistant degree markings, and -- if I have understood it right -- could be usable across a whole range of altitudes, as long as your string length is 25.465"...which Gatty measured out on the chart itself (for those mariners cast adrift without a tape measure in their pockets).

If anybody owns Gatty's book, I would be grateful to find out what "HARP" stands for.

The final item I have uploaded is an excerpt from the November, 1943 Popular Science magazine (available online from Google Books), which described the uses of this book and the charts.

Of course, any lifeboat without a sail would be powerless to go anywhere other than where the wind and waves swept it along.  For people in that sort of lifeboat, Gatty's book could  only help as a morale booster (or not - depending on whether they were drifting to an Allied-held island or a Japanese-held island; or possibly they would be drifting away from ALL land...and Gatty's book would help clarify in their minds that they were all going to die real soon now).

I don't know if any mariners or downed airment actually USED The Raft Book for its advertised purpose, but the amount of navigational knowledge that it packages in a concise fashion is astonishing. 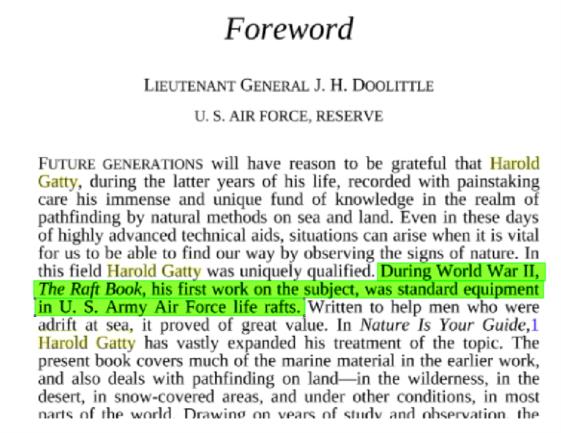