Bruce Cutting you wrote: NO the precession and centering happen for the same reason and is due to
the same force (namely gravity).  The problem visualizing this is because
the force acting on the gyro is a cross product of gravity and the angular
momentum vector (i.e.  The force exerted on the gyro is at right angles to
either angular momentum or gravity).

I don’t agree with you that the settling to the vertical is all due to gravity, except in so far that gravity keeps the gyro in its cup.  I think it has to be because the radius of curvature of the cup is greater than that of the pivot point.  Your last two references explain why the tilted gyro begins to precess rather than toppling over, but they don’t answer Bill’s requirement which is to explain why the tilted gyro gradually erects itself to the vertical.   The first part of your first reference https://physics.stackexchange.com/questions/281291/why-does-a-spinning-top-get-back-upright-when-knocked   gives more scope to answer Bill’s requirement, and it gives a rather cute video https://www.youtube.com/watch?v=m1PpL77vcOM to prove that the self righting actually occurs, even for a top heavy gyro.  The explanation doesn’t quite fill the bill, because the pivot tip of the gyro isn’t restrained as ours is, and the analysis leaves out any bits the writer feels unnecessary.  However, it does state that it’s OK to assume that a single force can produce a moment about the CG of a spinning gyro without the need for an equal and opposite coupling force or a physical fulcrum to twist about.

Fig2 shows the gyro 180 degrees of precession later when it will be tilted to the left.  Looking from above, the point must have travelled in a tiny circle around the cup, so there is friction at right angle to the spin axis.  In this position the friction force F is pulling down into the paper.

Fig3 shows the forces on the pivot point in greater detail.  There will be three forces mutually at right angles to each other: weight reaction W acting vertically upwards, the force C acting towards the centre of the cup, and a friction force F acting in the opposite direction to the direction of precession.

Fig4 shows the side view with the Gyro tilted to the right again.  L is its angular momentum vector. Using the right hand twist rule, the weight torque vector is acting into the paper and is making the spin axis precess into the paper.  The torque due to the force C about the CG is about the same torque axis through the CG as the weight but in the opposite sense, so it’ll slow the horizontal precession slightly.

We need a torque vector acting at 90 degrees to the spin axis angular momentum vector L to make it start to precess upwards.  F is in the correct direction to produce a torque vector which would lead to precession in the vertical plane except that, as drawn, it’s pointing the wrong way and is trying to move the spin axis away from the vertical.   However, maybe the motion in the cup is more like fig 5; that would work.  There we must leave it until one of our expert mathematicians takes up the thread. DaveP 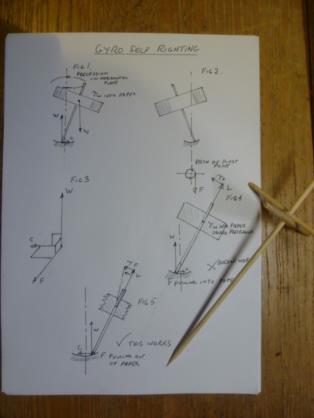