There are often ways to avoid a spherical solution, but in this, did you just get a coincidental match? The "long way" track that you have drawn is a "long way" from the great circle in that direction which would necessarily pass through the antipodes of Boston (in the Indian Ocean near 109°E and 42°S). But that does suggest a different way to ponder this problem. Suppose you try to find the great circle distance and initial course from anti-Boston to Wellington... How does that distance and course relate to the data that we actually want?

Now getting to the interesting part of your post... Your attached map: 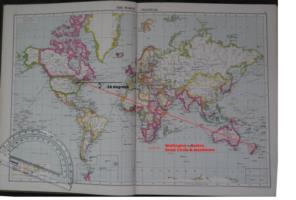 ...shows an interesting political map (sadly on a grotesquely-distorting Mercator projection --one of the worst possible choices for a global political map!). It has some curiosities, such as the "Japanese Empire" and some antique borders in eastern Europe. I'm going to guess that it was published around 1930 and probably not later than 1935. So what would be your best flying route from Boston to Wellington in 1934??