A little over a year ago, we were talking about the longest open sea great circle route that can be found on the Earth. It runs from Pakistan to far eastern Russia. If you sail southwest from Pakistan and keep your current course always parallel to your wake (well, really keeping your current course vector parallel with your last course vector in an instanteous sense), you will sail out of the Indian Ocean, under Cape Horn, and then all the way up the Pacific to Kamchatka, and in the process you will never bump into any significant land (might be an island or two in sight somewhere on this passage, but nothing big). That's a long, long, long great circle arc. Back then, I suggested that I wanted to cobble together an "analog great circle computer". If you think about it, that's a very simple device. So I walked around my apartment looking for something to make this easy, and then I realized, "I already have one!" complete with scales in various units. Attached below is an image of this "analog great circle computer" set up to solve the Cook Strait to Kaui problem. Given the low accuracy of the inputs, this analog device is certainly sufficient for the task yielding the distance +/ 25 miles. I won't bother posting any numbers since, of course, it's much easier to solve by hitting Google and typing in "great circle distance calculator".

You'll note that my "analog great circle computer," also known as a globe in a stand, has an unusual sort of "analemma" on it. Most analemmas on old globes display both the Sun's declination and the equation of time in one diagram creating that familiar "figure eight" shape. This one is a simple oval since it does not plot the equation of time. Oval "analemma" diagrams like this were relatively common in the early 19th century, but finding one on a relatively modern globe is a curiosity. 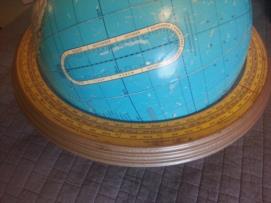