Well, if this was a navigation course, the leader would say “What have you learned today”.  I’ve learned a lot.  I’ve seen some interesting methods, and some I’d like to try out.  I also learned a couple of other things.  Firstly, don’t let your enthusiasm trick you into calculating spherical geometry when you’re tired.  I started after a day out driving the family around and walking in the cold, and my first attempt was a disaster with the distance coming out as 6573nm.  A quick Google of “Distance New Zealand to Hawaii” showed I’d screwed up big-time.  This led to another discovery.  I read that the cosine rule isn’t suitable for big triangles, so at first I thought that was the problem and that I’d have to get into haversines for the first time in 40 years.  However, after a little nap, I decided to have one last try with the cosine rule, this time using a triangle based on the South instead of the North Pole. While doing this I realised that in my haste, first time I’d used the lat and not the co-lat of the destination.  My second attempt: distance = 4069nm Initial bearing = 025.88degrees agrees with most others.  The time taken for the second attempt was 39minutes, but working longhand I have to check all the written figures at least three times.  My working is shown in the snaps below. 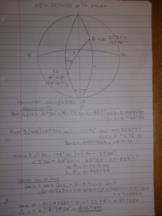 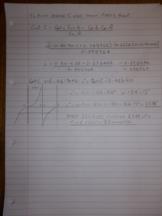