Reply
Re: Google Honors John Harrison with "Doodle"
From: Brad Morris
Date: 2018 Apr 3, 15:19 -0400
Sean
The clock to Harrison's left hand represents H1.  It has the famous inverted paired pendulums.  The average viewer will see that as a distinguishing feature.  The true H1 has multiple clock faces but this wouldn't translate well into a cartoon, where the average person can't be expected to know that.  One dial is substituted for the many and that average person thinks clock face, thus time (and perhaps chronometers).
In any event, it's just a cartoon.
Brad
On Apr 3, 2018 8:17 AM, "Sean C" <NoReply_SeanC@fer3.com> wrote:

Google is honoring John Harrison's 325th birthday with one of their "doodles". Notice the grasshopper leaping over the clock. It's a nice touch, even though the cartoon clock looks almost nothing like H1 .. or even H2 or 3. 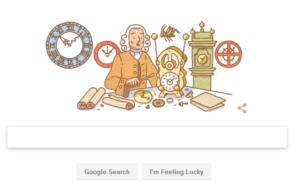