I met George and his wife Joan in July 2009 when I was on vacation in Britain. My wife and I took the train up to Oxford from London, George said he would meet us at the station. I asked him how I would recognize him, he said "just look for Father Christmas." We got off the train and walked into the station and I walked right up to him and said "hi, George." I have attached the only photo I took of him (with my wife in the university hall where graduation ceremonies are held at Oxford) and you will see why it wasn't a problem spotting him in the crowd.

He drove us out to his house about five miles outside of town and his wife Joan made us a nice lunch and showed us around her large garden. Joan is also a physicist, They then took us back into town and gave us a walking tour of Oxford and the university. They couldn't have been nicer to a pair of Yanks. I really considered him to be a friend. I will miss his his many erudite inputs to the list.

I know that I will miss the many interesting discussions with George. I just went back and re-read many of his posts which brought back those exchanges to my memory. This Internet age has brought back the "good old days" in at least one respect. There was a time when a person was known as "a man of letters" which was based upon his written communications, letters that preserved his thoughts and could be re-read many times and shared with others. There was a time when peopled carried on written conversations over many decades getting to know each other quite well though never having met face-to-face. Then we went to the instant communications method of the telephone, communications that disappeared like a burst soap bubble as soon as you put down the receiver. We now are lucky that internet discussions are written (even though on electrons) so that they are preserved and easily accessible to us and to others. We can go back and re-read posts and others can also get to know George even though he can no longer contribute any more of his wisdom to this discussion group.

"Send not to know for whom the bell tolls for it tolls for thee." 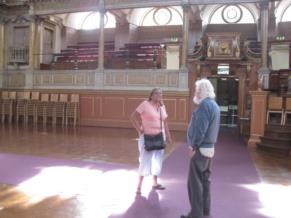