I thought it might be of interest to share this image of a short grainite pillar sitting in an otherwise undestiguished field a few miles from my home in the Scottish Borders countryside. The pillar has my Garmin GPS device sitting on the top of it. This pillar is one of about 900  "passive GNSS" stations scattered around the United Kingdom.

These stations are there for surveyors to determine position coordinates accurately using differential GNSS methods. A receiver is placed over a station such as this and the error of this receiver against the known position of the station is used to correct the receiver being used for the survey somewhere 'close by', that is within 10 km or so. The 'stations' can vary in appearance and type, from rivets in the pavement, bolts or hanging brackets on walls or vertical faces and 'Bernstens'. On average, the accuracy of the known (and freely available) latitude and longitudes of these passive stations is about 2 inches.

This passive station in the picture is a Fundamental Benchmark, which is the most accurate type. This particular one has a latitude of North 55° 10' 58.121271", West 2° 50' 27.629651". That is a precision of about one thousandth of an inch! My Garmin shows North 55° 10' 58.2", West 2° 50' 27.6" and the error on position was about 5 feet. It should be added though that the Garmin was using the WGS84 geodetic system and the position given for the station is using the European ETRS89 system, but the difference in this case is certainly within the accuracy of my Garmin device. The UK would appear to be unique in having an infrastructure of passive stations such as this.

The point here is that - in the UK at least - introducing deliberate errors into the GPS system would be very easily defeated. 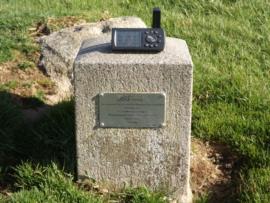