Bob, that's a great photo, so stunning I wondered whether it might have been a product of early 20th century PhotoShoppe. 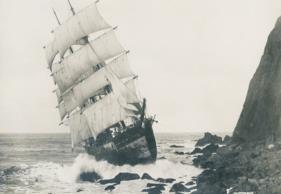 No, not PhotoShoppe, just amazingly good timing on the part of the photographer as it turns out. And it's also perhaps not an example of incompetence but rather a bit of diabolical competence. Here's a nice article suggesting the wreck was insurance fraud:
http://oceanscape.aquarium.org/explore/general_articles/the-glenesslin-wreck-folly-or-fraud.