Herman Dekker, you wrote:
"I had to degrade to this method, because this week when, for the first time, I tried to shoot a lunar, but my stiff neck gave problems.
I could see the sun at ~60° hight with pain in the neck, so I quitted."

Whenever I hear this concern about awkward poses shooting lunars from an observer, I refer to an old vaudeville joke, often attributed to Henny Youngman:
PATIENT: "Doctor, Doctor! It hurts when I do this!" (arm twisted behind head)
DOCTOR: "Well then, don't do that!!"

I suggest you do what they did in the 19th century: wait for convenient sights. Coming up in the next few days, you have some nice opportunities to shoot Moon-Jupiter lunars. Both objects will be relatively low in your southern sky. You'll be able to hold the sextant horizontally, and you should find you get good results. You can always come back to "GMT by lunar altitude" another day.

While I'm thinking of it, it has occurred to me that there may be some confusion on the meaning of "horns horizontal". When I use that expression for the appearance of the Moon, I mean that a line drawn through the horns, which is essentially identical to a line drawn from the Moon's north pole to its south pole, is horizontal, as in the attached image. Equivalently, the Moon's orbit, which is nearly the ecliptic, is vertical relative to the observer's local horizon. This latter condition is a good way to predict when you'll have reasonable conditions. When does the ecliptic climb vertically away from the horizon in your location (or within reasonable limits of vertical)? Maybe when Virgo or Leo is rising? If so, then when the Moon is in that part of the celestial sphere and rising, the horns will be nearly horizontal. 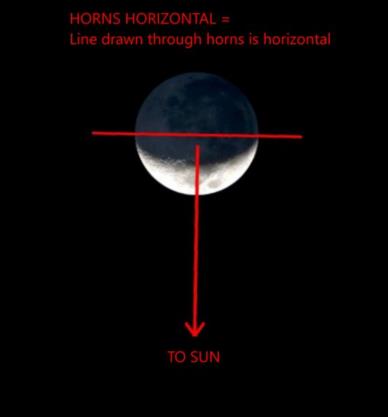