Frank has mentioned using a globe, some pins and a piece of string to plan a GC route a few times. I was recently on Amazon and remembered what he had said and that got me wondering: does anyone make a globe out of cork?

Well, apparently someone does. Unfortunately, this globe does not look very well put-together. In the attached image, you can see that the meridians don't even line up at the seam on the Equator. Also, there don't seem to be enough parallels and meridians to facilitate the actual planning of a GC route. Although, I suppose one could separate and re-align the two halves ... and even draw in some additional parallels and meridians. The addition of a scale on one of the meridians might even make it possible to estimate distances. Hmmm...

A brief search of other retailers returned what appears to be the same globe (same stand, size and markings), with some variation of the color scheme. Looks like this particular manufacturer has cornered the market on cork globes. (That sounded like a bad joke!) 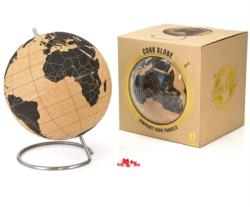