Sean, you wrote:
"I was recently on Amazon and remembered what he had said and that got me wondering: does anyone make a globe out of cork?"

Heh! Cork as a globe material never occurred to me. I do, however, purchase lots of small globes and hand them out in almost all of my classes (some photos from amazon adverts are attached below). I don't use them for teaching great circle paths, though sometimes that comes up indirectly. Instead we do the basics of celestial: look up the GHA and Dec of the Sun, and stick a pin it. We do this several times during the course of a day, and using Google Street View, we can often visit the actual spot on the ground where the Sun is straight up at that moment --which drives home the point. The material for these globes is synthetic sponge. They're marketed as toy globes or as "stress balls". These are not recommended for navigation (!), and they have the printing problems you mentioned. I have one misprint that I love where the southern hemisphere is rotated around nearly 180° so that Australia is about where Brazil is supposed to be. There is variation among manufacturers, but the level of detail is often relatively high for such small items, and they usually include lat/lon lines every 15° as well as dashed lines for the tropics, which are also quite useful in class. These toy globes do let you experiment with great circles, and they also serve as a compact database of crude latitudes and longitudes. I buy them in bulk for classes, so they cost me about $0.50 each. In any given box of a dozen, one to four of them are too badly printed to use in class, so the effective price is a bit higher. 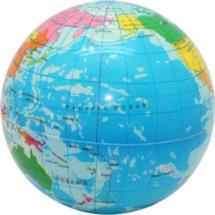 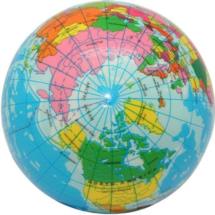 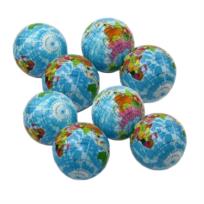