Norm, you wrote:
"Isn't it true, actually, that, in general, at closest approach, the angular distance is at a minimum, the rate of change of angular difference goes through zero and hence in the region around closest approach distance is always changing minimally. Hence, this is an awful time to do Lunars for longitude in ANY situation."

Yes, for a few hours around when we were talking about it, it was an awful time for Moon-Jupiter lunars because, as you say, the distance was at a minimum. Of course this does not apply to lunars with Aldebaran and Regulus as the other body at that same time. But how can you tell? How can you tell whether another body is in the right place for lunars?

To determine whether the lunar distance is changing rapidly enough for adequate discrimination of GMT, you can calculate a series of distances (easy enough today), or you can look up the calculated distances in some online almanac (e.g. mine, see "Predicted Lunars" here: http://reednavigation.com/lunars/). You can scan down the table and see how the lunar distance angles are changing per hour. I've attached the relevant bits for last night. Notice that from 0500 to 0600 GMT the Moon-Jupiter distance changes by less than a minute of arc. Looking at the neighboring values and "extrapolating the parabola", I would say the minimum distance was around 0545. From about 0530 to 0600 the (true, corrected) distance would change by less than one-tenth of a minute of arc. This is clearly useless for determining GMT. Meanwhile the angles for Aldebaran and Regulus are changing at the usual 30' per hour while the angle for Pollux is changing at a rate of around 13' per hour (mediocre, but not entirely useless, for determination of GMT).

But suppose we don't have tables right in front of us? Or suppose you're just looking at the stars in the sky wondering if you've got a good opportunity to use a short distance lunar for GMT? There is a way...

We can also determine the times of minimum change change in lunar distance just by looking at the "face" of the Moon in the sky relative to the positions of potential objects for lunar shots. The Moon glides across the celestial sphere in a direction nearly parallel to its (the Moon's) equator and nearly perpendicular to the line through the horns of the Moon, which are very nearly at the Moon's north and south poles. In the case of the full moon or nearly full moon, like last night, it's not possible to see the "horns" but a passing familiarity with the features on the face of the Moon is enough to spot the Moon's equator and the north-south meridian on its face. So when we observed Jupiter in the sky last night and saw that it was almost perfectly aligned with the north-south meridian on the Moon, that was all we needed to determine that the rate of change of the distance had to be nearly zero. Jupiter was sitting on that axis perpendicular to the path of the Moon's motion on the celestial sphere. As long as the other body's position angle from the Moon's center is within about 45 degrees of the Moon's equator (extended across the sky) then it should be a reasonable choice for determining GMT.

-FER
PS: Note that there is nothing wrong with measuring a lunar to test the observer's sextant and skill even when it's a bad geometry for determining GMT. In fact, that half hour period last night might have been interesting for testing purposes since it would have provided an exact stable angular distance for an extended period of time. Also note that there are other reasons for avoiding short angle lunars (anything less than about 15 degrees) for GMT even when the geometry is just right. 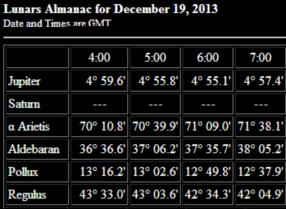