Yes, the bones of the Niantic are buried just a short distance under the non-descript towers around the corner from the Transamerica Pyramid in San Francisco. The vessel was hauled up into the shawllows in 1849 at the head of the old cove after a lucrative voyage bringing goldbugs to California. For a few years offices were built on top of her and the hull was used for storage. A fire in 1851 apparently burnt everything down to the waterline. Fill was dumped onto the wreck, and later a Niantic Hotel was built on top of the site. The site was excavated in 1978 during construction of a new building. There's a commemorative sign marking the spot which you can find at the corner of Clay and Sansome streets. The augmented reality company Niantic, Inc., spun off from Google, took their name from the vessel. It seems appropriate since it's the name of a majestic old ship hidden and buried beneath a modern city. What else might be lurking in that city?

Here's a nice map showing some of the vessels that were buried as that cove was filled in. This sort of thing is common around the world, of course. Port districts often build out onto fill as the harbor areas become too shallow or too crowded. In San Francisco the circumstances are tied to the Gold Rush and the very rapid development in years shortly after which makes for a better story than most. 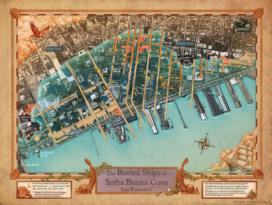