And here's a puzzle for you:
What is the connection between the Niantic and modern piracy (and even modern celestial navigation)?
Step ONE: where is the Niantic today and how did it get there? Hint: pyramid(s)!

Step TWO: what modern entity is named after the Niantic?

Step THREE: can you name the game?

Yes (I don't want to spoil it for others)

Step FOUR: can you cheat the game?

Apparently so using GPS Spoofing and something called an internet bot.

Step FIVE: how can you defeat the cheater?

By programme mods and eventually by banning cheaters.

At least a photograph of a painting of Niantic is readily available.  When I was constructing a presentation on William Bligh, I really struggled to find a picture of HMS Providence, his lead ship for the Second Breadfruit Expedition.  Fortunately, a photograph of a postage stamp showing her was available from St Helena of all places.  How accurate it is, I'm not sure. DaveP. 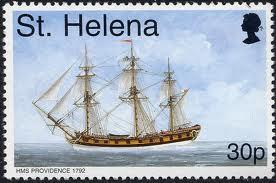